Qualification for Euro 2020 a long and tedious process 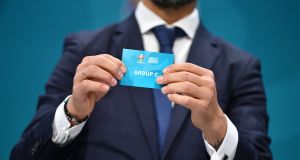 Which four of the 16 countries currently in the play-offs will end up qualifying will not been known until late March just weeks before the tournament itself kicks off in Rome in mid-June.

In the 1980s it was said that the only thing harder than getting onto the Irish rugby team was getting left off it. One could say the same thing about qualification for Euro 2020 as it appears difficult to miss out however consistently poor your performances are.

To maximise revenues Uefa appear determined to play as many matches as possible whilst eliminating as few teams as possible as late in the day as is feasible. To secure these objectives Uefa have created a system of qualification for Euro 2020 only marginally easier to work out than Fermat’s Last Theorem. So complicated have things become that one explanation attempted recently drew heavily on the insights of a “Football permutations expert”.

The complexities are created by the interactions between the two separate qualifying paths for Euro 2020. The traditional groups and the Nations League combine to paradoxically make it difficult for a country to qualify for the finals whilst simultaneously making it difficult for them to be knocked out.

Perhaps the best example of this is the Republic of Ireland’s qualifying Group D from which the two best teams (Switzerland and Denmark) qualified automatically and two others (Ireland and Georgia) secured a Nations League Play Off.

After playing 20 matches throughout 2019 the only country definitively knocked out were Gibraltar whose grand total of zero points and goal difference of minus 28 always made them long shots for qualification.

Mind you even this single elimination seems harsh considering that the own goal scored by Gibraltar’s Joseph Chipolina in Dublin enabled him to finish as the Republic of Ireland’s joint highest scorer during qualifying with one goal.

The lifeline thrown to the Republic of Ireland by the Nations League play-off might seem more deserved if our performance in the tournament had been any good.

However Ireland finished bottom of our Nations League group having failed to win a single match and made history by becoming one of the first international teams ever to suffer the embarrassment of relegation (from League B to League C).

Perhaps inevitably Ireland got a late reprieve when Uefa EFA realised that if they expanded the size of the Nations League groups from three teams to four then in future they could play even more matches.

So reluctant are Uefa to actually eliminate teams that for the first time the draw for the European Championship finals in Bucharest on Saturday will include 12 countries who will not actually play in the tournament.

Which four of the 16 countries currently in the play offs will end up qualifying will not been known until late March just weeks before the tournament itself kicks off in Rome in mid-June.

Host cities Dublin and Bilbo have been twinned together in Group E but even the most committed fan will struggle to get excited about provisional fixtures such as Spain v the Republic of Ireland or Slovakia or Bosnia and Herzegovina or Northern Ireland. Making the draw even duller is the fact that the composition of certain groups is largely known in advance with Belgium, Russia and Denmark making up three-quarters of Group B.

But u sometimes even the most unpromising of draws throw up compelling scenarios. In the draw for the Welsh Youth Cup last September, Ynysddu Welfare Football Club were drawn to play away against Briton Ferry.

This came as something of a surprise to Ynysddu as it had decided against entering the competition on the perfectly sensible basis that it did not actually have a youth team. Indeed, Ynysddu only learnt about the tie when their opponents engaged in some banter with them on social media.

However, Briton Ferry would pay a heavy price for their friendly sledging as, following a Twitter appeal for players, Ynysddu were inundated with offers from unattached footballers from all over Wales.

After a single training session at which their newly-assembled players met for the first time, Ynysddu Welfare went on to win the tie 7-6 on penalties. This left Briton Ferry in the embarrassing position of being the first team in the history of football to get drawn against non-existent opponents and then get knocked out by them.

Equally bizarre was the draw for the first round of Carabao Cup in 2017 which for some odd reason took place in Bangkok via a Facebook feed with no sound which promptly crashed after just one team had been drawn. Following reconnection, eagle-eyed supporters noticed that something might have gone wrong when Charlton Athletic were drawn to play both at home to Cheltenham and away to Exeter.

Sometimes draws face more serious problems than accidental anomalies. Last year Michel Platini admitted that the draw for the 1998 World Cup Finals was partially fixed so that hosts France and favourites Brazil could only meet in the final which is precisely what happened.

With alarming frankness Platini explained: “There was a little trickery. We did not spend six years organising the World Cup to not do some little shenanigans. Do you think other World Cup hosts did not?”

Sepp Blatter later suggested that “hot and cold balls” were used to fix European draws at Uefa. Last April AS Roma was embarrassed when, owing to a “technical problem”, they appeared to offer for sale tickets for their Champions League semi-final against Liverpool the day before that tie was actually drawn.

But despite these potential pitfalls the excitement of a live draw is infectious and can attract the most unlikely participants.

In 1991 Donald Trump conducted the draw for the fifth round of the English League Cup from Trump Towers in New York. Sadly Trump is unavailable for Saturday’s event which is unfortunate as he is possibly the only person in the world who could make the draw unmissable if only to see who he would pair Ukraine with.