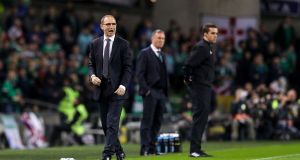 Martin O’Neill: “The bigger picture is the Euro qualifiers. There is no question about that.” Photograph: Ryan Byrne/Inpho

Jimmy Dunne is back in the Republic of Ireland squad ahead of the trip to Aarhus where manager Martin O’Neill will take another opportunity to weigh up some options in what is now effectively a dead rubber.

Last place for Ireland in the three-team Nations League group and the third seeding for December’s European Championship qualifying stages group draw that goes with it can no longer be avoided after denmark’s deserved 2-1 over Wales in Cardiff on Friday night.

“Perhaps there could be a little bit of experimentation on Monday night,” he said. “I’m not talking about changing 11 players in the side but there are some other players that maybe I will have a look at.”

O’Neill acknowledges that the performance against Northern Ireland was not nearly good enough and insists that what he had hoped for was a substantial improvement to the way the team passed the ball, especially in midfield.

“What we were trying to do was to not be playing so many long balls, to be attempting to play through the other team. We’ve got three men at the back, we’ve got two wide players and what we wanted to do was to get a little bit more midfield play, get on the ball and create a bit more in and the penalty area.”

But, he claimed: “it’s not to do with tactics, it is to do with taking the game by the scruff of the neck and having that character to do that. I think that’s it, taking a bit more responsibility for a situation and being able to deal with it.”

Despite that, O’Neill nevertheless accepts responsibility, he says, for the team’s failure and for the team’s apparent inability to do what he says he wanted them to against a Northern Ireland side that looked significantly better on the night. The points may no longer matter much but a better performance in clearly required in Denmark.

Ireland will be without Seanie Maguire, Alan Browne or John Egan who have left the squad with hamstring, shoulder and calf injuries respectively while James McClean misses out due to suspension and Glenn Whelan has returned home.

Dunne, a 21 year-old defender currently on loan with Hearts from Burnley, comes back into the squad, having been cut last weekend and Manchester United’s 18 year-old Lee O’Connor makes the plane too after having apparently impressed over the course of this week in training.

Bigger picture O’Neill also suggested that Michael Obafemi would stay with the squad too although he seemed to play down the teenage striker’s prospects of actually featuring immediately after the Northern Ireland game when he stressed how “raw” he feels the Dublin-born Southampton player still is.

Ireland head to Aarhus, where they scored a surprise 4-0 win under then manager Steve Staunton in August 2007, without a goal in three games and with just one win in their last 10 but O’Neill remains adamant that the team will be in better shape by March when the qualifying campaign proper starts.

“The bigger picture is the Euro qualifiers,” he says. “Regardless of what happens on Monday night, that has always been the case.

“We had a really strong battle to qualify for the Euros and we got it through to the playoffs and hopefully some of the players are coming back. I’m hoping one or two of the young lads . . .who have only played a couple of games, can come through.

“But we have to try score a goal. That would be nice.”