Hatred of Windsor Park in 1993 has softened to pantomime

Michael Walker: There were boos in the game of two Irelands, but humour too 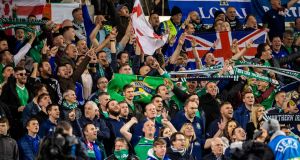 In Colum McCann’s novel TransAtlantic, in the the section on senator George Mitchell and his role in the build-up to the Belfast Agreement, Mitchell (via McCann) considers the various participants, voices and verbal tit-for-tat phases he has been through – and is yet to go through. “Peace and Judy,” he muses.

It is a phrase for an era in Irish life, though not just Irish life.

As we know, McClean occupies a special place in Irish life and football. He is the Border. He is the Free Derry tattoo. He is Wolfe Tone. He is Fergus Slattery out on the left wing. Commitment unquestioned.

McClean is the acid test. Sure enough, 48 seconds into Thursday night’s match at Lansdowne Road, his first touch was met with a predictable burst of boos from the 2,000 Northern Ireland fans “down south” for the night.

Thereafter came the chant: “James McClean, he’s one of our own.”

When he got over the shock of it, even McClean may have laughed. Because here was irony from a corner not always associated with it. Here was a knowing wink. Pantomime.

We have spoken so much about 1993 at Windsor Park and its frightening sectarian electricity – the 25th anniversary landing today – that the contrast was as welcome as it was unexpected.

There was a report of bother on Thursday in which two Northern Ireland fans were attacked. But it was no riot, no mass confrontation. If The Billy Boys was sung, it was inaudible. No surrender? Yes, that’s still around during the anthem but it has been appropriated by England’s far-right fans and not many outsiders want to be one of them, throwing insults and plastic chairs across European city centres.

The Scots started it with their very deliberate Tartan Army friendliness – in order to differentiate themselves from the English. The Irish fans at Euro ’88 and onwards had that same approach: drink, shake hands, sing, miss kick-off, drink some more. A roaming social network.

Their Northern Ireland counterparts had not had that experience in the budget airline era until Euro 2016. Once in France they enjoyed themselves and they enjoyed being seen as friendly and peaceful. As the Republic of Ireland discovered in the late 1980s and early 1990s, via the global game you can present a different face to the world. It in turn might view you differently.

In France three summers ago, there was an element of that for Northern Ireland fans. Hence the FAI praised both sets of fans on Thursday night.

What some in both sections of the crowd at Lansdowne will have recalled – because they were there and took part – was that when Northern Ireland fan Darren Rodgers died from a fall at Euro 2016, Republic of Ireland supporters saluted him in the match against Sweden. Rodgers was 24. There was applause and a chorus of “Stand up for the Ulster men” in the 24th minute.

The days of 24-hour non-stop antagonism are shifting. Northern Ireland as a constituency voted 55 per cent to remain in Europe. By definition, a chunk of them had to be Protestant, small-u unionists. Within the Northern Ireland squad, there are said to have been informal chats about the national anthem and what it says to northern Catholics in 2018.

Let’s not go overboard, the attitudes that sustained the Troubles haven’t gone away, you know.

Pipe bombs and ammunition were found in west Belfast yesterday; at Euro 2016 there was a group of lads with a Lambeg drum in Lyon who did not look as if they would take kindly to the suggestion that Wolfe Tone was a Prod.

“Wolfie Tone, he’s one of our own,” they did not sing.

In May Cliftonville players bowed their head at the Irish Cup final when God Save the Queen was played, and three months later former Manchester United goalkeeper Roy Carroll, now of Linfield, refused to shake one Cliftonville hand in the line-up when the teams met in the Irish League.

Then there was the booing of the national anthems on Thursday.

Some shook their head at this and a couple of politicians produced public condemnations. But these were either obligatory or overstatement: in terms of the past, in terms of 1993, this is progress. Peace and Judy.

Even the stick McClean took lacked the venom he received at Stoke City a fortnight ago and, up in the stands, Arlene Foster may well have reflected on the absence of such vitriol. The Ulster Farmers’ Union had just asked the DUP to consider backing the Brexit draft deal, so she had much to ponder.

Admittedly, not many around Arlene were thinking so as they made for the exits. The occasion was enough of a tranquil success for the football, or the absence of it from the home team, to move centre stage.

What there isn’t has become a talking point for Martin O’Neill as much as what there is. When a lack of personality among his players was put to him, he agreed.

“It’s not to do with tactics,” he said. “It is to do with taking the game by the scruff of the neck and being that character to do that.”

These are back-and-forth encounters, especially with a manager whose team are struggling to tread water. It became about absences: goals, momentum, structure, personality, even his own alleged unassertiveness.

“No, no, absolutely not, quite the opposite,” he said to the last point. “I’m speaking quietly to you but it’s not to do with not coming out fighting. I haven’t got a problem with that.”

That reads as defiance and O’Neill is not about to be ousted, but there is a collective sag around the squad, among the fans coming in and those not going out of the house. And, possibly, to the FAI finances should the European Championship qualifiers follow the pattern of the past 12 months.

Monday in Denmark will be difficult for O’Neill. That was one obvious conclusion from Thursday. A lack of edge, a lack of cutting edge, those were others.

And at the end of it all, within minutes of the final whistle, Lansdowne Road re-erected its rugby posts. There you go, said the IRFU. Peace and Judy.