No redemption as Brazil humiliated by Germany 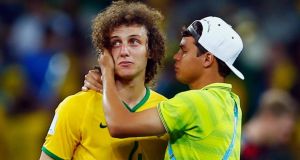 Brazil’s David Luiz (left) is consoled by his captain Thiago Silva after their 7-1 defeat to Germany in their 2014 World Cup semi-final in Belo Horizonte. Photogrpah: Eddie Keogh / Reuters 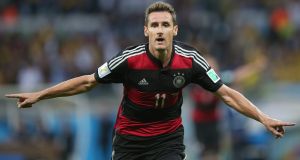 Miroslav Klose of Germany celebrates after becoming the highest ever goalscorer in World Cup history with the 16th of his career at the Estadio Mineirao in Belo Horizonte. Photograph: Fernando Bizerra Jr. / EPA 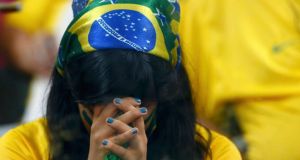 A Brazil fan can’t bear to watch during the rout at the hands of Germany in Belo Horizonte. Photograph: Eddie Keogh / Reuters 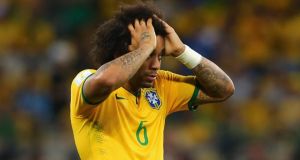 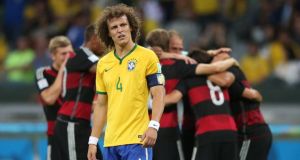 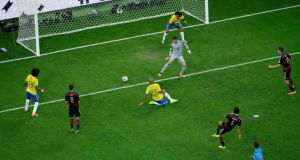 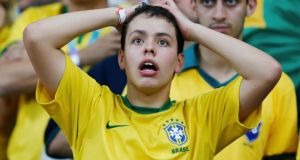 A Brazil fan during their crushing defeat to Germany in Belo Horizonte. Photograph: Marcos Brindicci / Reuters

To the Miracle of Bern add the one of Belo Horizonte. There was no dramatic comeback here like the one when Germany won their first World Cup back in 1954, just a landslide, but the scale of it all was no less profound and to be present at the event, with every respect to the Germans, felt somehow like watching a natural disaster unfold.

Certainly the sense of shock that descended on the Estadio Mineiro through the latter stages of the opening half an hour must be as close as any sporting occasion can go to producing emotion on that sort of scale. Women, children and quite a few men simply stood and wept as a nation’s dream was transformed in a matter of moments into a nightmare.

No team in World Cup history had ever been five goals up by that stage of a game and the idea of Brazil being the ones to be five down would, for all their flaws, have seemed utterly outlandish had anyone ever thought of raising it as a possibility beforehand. Still, as the goals flew in one after the other - numbers two, three and four within three minutes of each other - that is precisely what the home support had to come to terms with.

It is difficult to know where to start apportioning the blame; clearly the defending was utterly hapless with Dante and David Luiz reduced virtually to the status of bystander for most of the goals. They seemed, in fact, to be taking it in turns to be the most culpable with the PSG defender caught out badly for the first, a sidefooted volley by Thomas Müller who received Toni Kroos’s pass in an acre of space which he had cleverly made for himself as his marker was kept busy by team-mates.

Luiz was nowhere to be seen for a couple of the goals that followed while his stand-in central defensive partner was generally to be found making failed attempts at last ditch blocks, but the extent to which he and Júlio César in the Brazilian goal were laid bare by those in front of him was almost incomprehensible.

Luis Felipe Scolari, who would surely have been hankering after Thiago Silva more than Neymar as he watched from the sidelines, had sprung something of a surprise beforehand by preferring local boy Bernard to Willian, the Chelsea midfielder with a reputation for hard graft.

The reaction from the crowd as the team was announced gave a sense of what the manager might have been thinking when he made the call but the player’s inability to keep the ball was a pretty firm indication that it had been a mistake.

Hulk, his ludicrous price tag a greater mystery than ever after the last few weeks, was worse to be fair, with his mistake leading to the corner from which the first goal was scored. Fernandinho chipped in with a key role in the fourth, the Manchester City midfielder getting caught badly in possession by Kroos who scored after a one two with Müller and the rest of the team simply looked shell shocked as Philipp Lahm, Mesut Özil and others got involved in various combinations to set up goals for Miroslav Klose, Kroos again and Sami Khedira.

Clearly the Germans deserve some credit for all of this. We were aware from some of their previous outings that they are some way short of a truly great team, but the ease with which they almost walked some of the goals in bordered on pitiful with Klose, for instance, pretty much the only one to even react when his tame first effort came back off Cesar.

Their passing and movement over that unbelievable opening half was unquestionably good but they were scarcely obstructed and their tally of nine shots on target at the break to just one for the hosts came despite them having had significantly less of the possession.

Needless to say, the Brazilians were well beaten by the break and had the tournament sponsors been a little quicker to react they might have had their upbeat ads pulled from the stadium’s big screens while the players were away and the crowd struggled to take in what they had just witnessed.

Scolari did what little he could at that stage, replacing Hulk and Fernandinho, and for a few fleeting minutes after the second half got under way his side showed a little bit of attacking spirit. Again, though, it was embarrassing for the home side and their fans to see the way in which Oscar, then the utterly anonymous Fred, almost pleaded with the Mexican match official for a penalty when they looked happy to hit the ground.

Andre Schürrle, on the other hand, marked his introduction by adding another couple of goals, the first from a cross from Lahm that he stole in front of Müller to meet eight yards out; the second a fiercely driven strike that went in off the underside of the crossbar and which he had unleashed after doing well to control a short angled cross from the left. The Germans fans were delirious behind that goal but even the local fans gave the 23-year-old an ovation for his effort then ironically cheered the opposition passing for the next five minutes.

At that stage, the hosts were on course to surpass their worst ever defeat, a 6-0 hiding by Uruguay back in 1920, in what would be their first competitive loss at home for 39 years. Few amongst the crowd would even remember the Peru game in 1975 but their growing sense of anger was clear and when Bernard fluffed a simple pass even the local boy was booed loudly.

Oscar meant that the record was merely equalled thanks to a late strike after Özil had somehow failed to make it eight. It wouldn’t have shocked anybody had the Arsenal midfielder scored at that stage. All sense of disbelief had long since been suspended. Like the one in Bern, this game will surely be remembered for decades to come. Here, though, they would desperately love to forget.