Carabao Cup round-up: City and United come through to set up semi-final 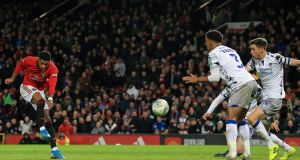 After two trophyless seasons for the red half of Manchester, the Red Devils will reach March’s Wembley finale if they can get past neighbours Manchester City over the two-legged semi-final.

Sky Bet League Two side Colchester made it tougher than the eventual 3-0 scoreline suggested, but Solskjaer’s side kicked on after a frustrating first half as Rashford and Anthony Martial scored either side of Ryan Jackson’s own goal.

John McGreal’s men did their 5,000 travelling fans proud as the U’s made their first visit to Old Trafford, with the lowest ranked team left in the competition stymieing the illustrious hosts – whose boss Solksjaer marks a year in charge on Thursday – through doggedness and discipline in the first half.

But just as Colchester supporters began to dream of adding to the Carabao Cup scalps of Crystal Palace and Tottenham, Rashford scored a fine opener on the break just 15 seconds after Jackson had a shot at the other end.

The Colchester man turned a Mason Greenwood cross into his own goal as salt was quickly rubbed into the wound, with Martial settling the tie from a smart first-time Rashford pass.

A brace by Raheem Sterling ensured holders Manchester City remain on course to win the competition for a third consecutive year after a 3-1 victory over Oxford sent them through to the semi-finals and a meeting with their great rivals.

Matty Taylor cancelled out Joao Cancelo’s first-half opener 21 seconds into the second period, but that was as good as it would get for Karl Robinson’s side against Pep Guardiola’s men.

The Spaniard had shown the hosts plenty of respect with his team selection and despite a few scary moments, saw his players come through unscathed.

Kasper Schmeichel was the hero for Leicester as the Foxes defeated Everton on penalties to reach the semi-finals for the first time in 19 years, where they will meet Aston Villa.

In scenes reminiscent of Everton’s Premier League victory over Chelsea, interim manager Duncan Ferguson hoisted a ball boy above his head in celebration after Leighton Baines drilled in a stunning 90th-minute equaliser to make it 2-2 at the end of normal time.

That completed a second-half comeback, with Tom Davies netting in the 70th minute after James Maddison and Jonny Evans had scored in quick succession in the first half for Leicester.

Jordan Pickford’s stunning save from Maddison in the first action of the shootout had Everton fans dreaming of a perfect comeback but Schmeichel denied Cenk Tosun and, cruelly, Baines to put Leicester on the front foot.

It was left to Jamie Vardy to confidently convert the decisive spot-kick, giving Leicester a 4-2 victory in the shootout and maintaining manager Brendan Rodgers’s remarkable record of not having lost a domestic cup competition since April 2015.