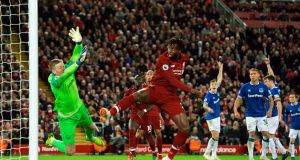 When the decisive moment arrived, almost six minutes into stoppage-time, Jürgen Klopp was on the pitch, David Pleat-esque minus the brown shoes, and the victory run took him all the way to his goalkeeper, Alisson, some 40 yards from Liverpool’s dugout. It was bedlam and, amid all this chaos, an unlikely hero had emerged in the shape of Divock Origi, scoring beneath the Kop with one of the more eccentric and ecstatic goals of any Merseyside derby.

They will certainly remember and cherish that moment here when Virgil van Dijk let fly with a volley in the final seconds and miscued it so badly that there was an audible groan from the home crowd, as if they suspected that was the last chance they would have to win this match. Van Dijk could be seen turning away in disgust. Except the spin on the ball took it high and then down and, suddenly, Jordan Pickford in the Everton goal was in trouble. The ball landed on the crossbar and, astonishingly, then bounced on to the woodwork again. Pickford was flailing at thin air and Origi, an 84th-minute substitute, was there to apply the finishing touch.

How vital could that moment be? If the game had finished goalless Liverpool would have left the pitch knowing that Manchester City’s vastly superior goal difference at the Premier League table meant the champions were, in effect, five points clear. Origi’s late contribution dramatically changes the picture again and Klopp’s celebration told its own story about what he made of that remarkable piece of late drama.

For Everton, it was a crushing moment. They have now gone 16 matches since the last time they beat Liverpool in a league fixture, going back to October 2010, and had contributed richly to an absorbing contest. Everton were often the more threatening team during the opening 45 minutes and defended manfully when they were subjected to some prolonged pressure in the second half.