Ireland fail to fill their boots against dogged Montenegro 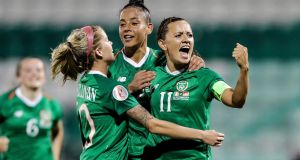 Ireland made a solid start to their campaign for a place at the 2021 European Championships with a comfortable win over Montenegro in Tallaght, where the points looked to be secure from the earliest stages even if a few more goals might have been required to add weight to Katie McCabe’s claim they can be contenders for top spot.

The scale of Ireland’s task on that front was starkly underlined before the kick-off here in Tallaght as the news came through that Germany had beaten second seeds Ukraine 8-0 away. Having put 10 past Montenegro at the weekend, the eight times European champions, it seems, have sent out an early message to their rivals.

Tom O’Connor was happy afterwards that his side had done what they had come to do, even if they had not quite managed to send out a message of their own.

“We’re very happy,” said the team’s interim manager. “That was what we said we wanted to do when we came into the camp; win the game and keep a clean sheet.

“I thought it might open up a bit more and there might be a few more goals but they were very dogged with their banks of five and four. If you want to score more goals against that then you need all of your players to be on top of their game and in the final third we just couldn’t do it.”

The goals proved hard to come by against a side that looked very much like it had come to Dublin aiming first and foremost to keep things respectable this time.

It made for a frustrating night for the hosts and the nearly 3,500 supporters who turned out to see them in action. There was a promising start as Tyler Toland put Ireland in front just seven minutes in with a low drive from distance that clipped the foot of the post on the way in. But it would be 20 minutes from time before Katie McCabe would get their second from the penalty spot after Jadranka Pavicevic had handled under pressure.

There were certainly enough chances for the home side to have scored another couple but a combination of determined defending, bad luck and poor finishing ensured there would be no repeat of the nine-goal margin Ireland enjoyed when the Montenegrins last came here three years ago.

There were clearly some positives to be taken from it all with Ireland showing a lot of composure as they ran things in the first two thirds of the pitch. Louise Quinn and Diane Caldwell were largely left to look on as Niamh Fahey anchored things in midfield and McCabe did much to direct the attacking side of operations in front of her.

Toland posed a persistent threat but should have had at least one more goal with the Manchester City midfielder firing well over just after the break and Rianna Jarrett went close on a handful of occasions.

There must be some concern, however, about the team’s inability to more effectively break down a side that the Germans had utterly dismantled. The visit of Ukraine, second seeds and major rivals for Ireland, next month should provide a firmer of idea of just how the campaign is going to shape up.