Martin O’Neill optimistic about Jon Walters ahead of Georgia 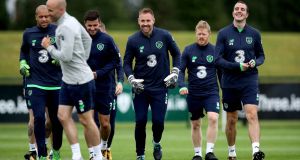 Jon Walters looks set to make it safely into the travelling party for this weekend’s World Cup qualifier in Georgia.

Jeff Hendrick may yet be fit in time to feature against the Serbs next week but the Burnley midfielder will miss the trip to Tbilisi along with James McCarthy, neither of whom travelled to Dublin on Monday.

“I don’t think he has completely ruled himself out yet of the Serbia game, it’s a few extra days,” said Martin O’Neill of the Dubliner who has been a feature of his starting line-ups whenever he has been available for the past couple of years. “It might be unlikely but he was feeling much better after the injection he had and those extra few days might help.”

McCarthy looks to be a lost cause on this occasion but Walters did some work away from the main group on Monday and now looks to be in with a very firm shout of playing some part on Saturday evening.

“When Jon did the injury first of all he thought it was really bad,” said the manager. “He’s upbeat now though and we’ll see how he goes in the next few days. If he doesn’t train tomorrow, I wouldn’t have a problem with Jon.”

Eunan O’Kane was the other player ruled out yesterday by injury although with Greg Cunningham already gone, another 10 were cut from O’Neill’s initial squad of 39 with the likes of Matt Doherty, Stephen Quinn and Sean Maguire all left at their clubs.

Kevin Doyle, Paul McShane and Preston’s Alan Browne are also amongst those to miss out although the manager suggested that some had been placed on standby with the possibility of a call-up if cover is required for the Serbia game.

There is no sign of Scott Hogan with the Aston Villa striker still in the process of securing his passport, apparently but the striker might yet be involved in the games against Wales and Moldova next month. Aiden McGeady and David McGoldrick, both of whose partners were due to give birth around now, are expected to join the rest of the group over the coming 24 hours or so.

McGeady’s impending arrival probably has a little more significance attached to it on this occasion than ahead of any recent game. The Sunderland midfielder’s goals against Georgia the last time Ireland went there proved decisive and with his case for a place in the team bolstered by the game-time he is getting at club level now, he appears to be back in the reckoning.

“He’s getting games,” acknowledged O’Neill, “so he should be match fit. And physical fitness is important for Aiden.”

O’Neill insists his focus will be entirely on Saturday’s game during the next few days with the only nod to the Serbia game likely to be a warning to the nine players who are a booking away from a suspension not to needlessly rule themselves out.

“I’ll mention it to the players,” he said. “I think they should try to stay clear of silly bookings. If something is, you know, one they must take for the team so be it but you know what, it happens.

“I’ll mention it to them, though. Some players might forget, seriously, about being on a yellow card... the time that Robbie threw the ball away in the game, I don’t think he realised that he had actually picked up a first booking.”

Rob Elliot is back in contention, meanwhile, and suddenly finds himself as the only goalkeeper in the squad playing top flight football after having been named in Rafa Benitez’s side for the first three league games of the new season.

Newcastle, though, have been linked with countless goalkeepers over the course of the summer and Elliot, who has had more than his fair share of setbacks during the last few years, is not taking anything for granted even if, he maintains, he will not get too worked up about the countdown to Thursday’s transfer deadline.

“You never know for sure you’re going to play, you never take it for granted. With having the injury before [the one sustained while playing for Ireland in early 2016], I was just keeping the head down, working hard and doing what I could in pre-season.

“I got the number one shirt and luckily enough played the first three games but there’s still a couple of days left in the window so you never know, you can’t really concentrate on that.

“In football, and in the Premier League, you know there’s always going to be three top ’keepers and you’re going to have to be really on form to play. As you get older and more experienced, you know what football is like, the roundabouts, especially in the transfer window. Whatever will happen will happen.”

1 TV View: Roy Keane but Daragh’s keener as Late Late fails to shoot the lights out
2 Ireland Slam England at the Gardens to open up Grand ambitions
3 ‘Manchester United are lucky to have you’: Klopp responds to Donegal schoolboy’s letter
4 Tipping Point: Defeat looks like the end for Tom Brady and the hated Patriots
5 World Cup moments: Mystery surrounds Ronaldo in 1998
Real news has value SUBSCRIBE
Crossword Get access to over 6,000 interactive crosswords