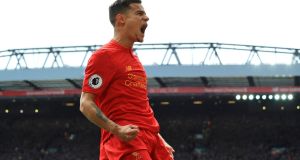 Philippe Coutinho: could be soon on his way from Anfield to Barcelona. Photograph: Peter Byrne/PA

Barcelona sporting director Robert Fernandez hinted on Monday that he is negotiating with Liverpool over Philippe Coutinho and hoped to complete a deal before the transfer window closes.

After signing Ousmane Dembele from Borussia Dortmund for a fee which could rise to €147 millio, Fernandez announced his intention to bring two more players to the Nou Camp.

“It’s true we are in negotiations over a player to try and sign them. We hope to reach a deal and present a new player,” said Fernandez when asked about Barcelona’s hopes of signing Brazilian playmaker Coutinho.

“Seri is totally ruled out. After analysing calmly, we decided that our priority was other positions,” Fernandez said.

Coutinho plays in a more advanced role than Seri and is reported to be Barcelona’s top target, with Paris St Germain’s Angel Di Maria also linked to the club.

“My intention is to sign another player, if it’s possible, two,” added Fernandez.

Barcelona, who sold Neymar for a world record €222 million at the start of August, have added Gerard Deulofeu, Nelson Semedo, Marlon, Paulinho and Dembele to their squad for the new season.