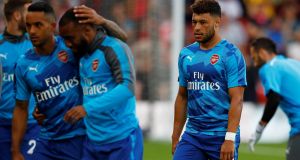 Arsenal’s Alex Oxlade-Chamberlain at Anfield during the defeat to Liverpool. Photograph: Reuters

Chelsea have kickstarted a frantic scramble for reinforcements in the final week of the summer transfer window by agreeing a fee with Arsenal for Alex Oxlade-Chamberlain, with the player potentially the first of three England internationals destined for Stamford Bridge before Thursday’s cut-off.

Oxlade-Chamberlain, who has entered the final 12 months of his contract, had been offered new and improved terms to commit his future to Arsenal but made clear towards the end of last week that his preference was to seek a new challenge.

Arsenal are not prepared to lose all of Oxlade-Chamberlain, Mesut Özil and Alexis Sánchez under freedom of contract next summer and, given the lack of suitors for the German and the hierarchy’s intransigence over the prospect of selling Sánchez this summer, that always left the Englishman as the likeliest to depart.

Liverpool had also been interested in Oxlade-Chamberlain, who had been secured from Southampton in 2011, but the 24-year-old’s preference was always to remain in the capital. Personal terms are unlikely to prove an issue, with Antonio Conte hoping a versatile player will challenge Victor Moses at right wing-back and bolster his midfield options with a Champions League campaign ahead. A fee of around £35m had been mooted.

Oxlade-Chamberlain could yet be joined at Stamford Bridge by Leicester City’s Danny Drinkwater, with talks ongoing between the clubs. There is interest, too, in Ross Barkley at Everton – the attacking midfielder is in rehabilitation from a torn hamstring and will not be available until the new year – and Swansea City are braced for a bid for the Spain forward Fernando Llorente.

Chelsea’s young forward Jeremie Boga has signed a new three-year contract and become the 28th player to be loaned out by the club this summer, joining Birmingham City in the Championship for the remainder of the season.