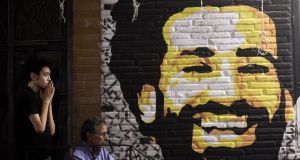 Egyptian fans watch the Champions League final between Real Madrid and Liverpool in Cairo. Mohamed Salah suffered a shoulder injury in the game that could limit his involvment in Russia. Photograph: Getty Images

Pélé tends to be the man most commonly associated with the prediction that an African country would win the World Cup by the end of the 20th century, but the then England manager Walter Winterbottom actually beat the Brazilian to it by 15 years when he raised the possibility in 1962.

It was quite a thing to say back then. Just one African team, Egypt, had ever participated in the finals and the Confederation of African Football (CAF) had only been founded six years earlier by the continent’s only four independent nations.

It was the centenary of the first game played on African soil, though, and the English, of course, had a big hand in establishing the game on the continent. The two oldest clubs still in existence were both set up by the British army in 1862. In Egypt, the Khedivial Sporting club, now Gezira SC, was established by – and for – officers on 150 acres of Cairo parkland. By 2012, it had developed into a multi-sports facility with 45,000 affiliated families. And in South Africa there was the club that had actually hosted the first match – Savages FC.

The game took hold spectacularly. And as countries started to win their independence from European powers a century later, many viewed their national teams as a way of asserting their identity, even if Fifa seemed happy with a World Cup dominated by sides from Europe and South America, with seemingly endless obstacles placed in the way of the nations that tried to qualify.

Portugal brought four players from Mozambique, including the great Eusebio, to England in 1966. The 15 African that had initially entered for that tournament all withdrew over the lack of guaranteed places. Four years later, Morocco managed to make it through a more structured process to Mexico.

By then, though, the numbers of independent countries and votes they brought to Fifa were finally beginning to change things. Stanley Rous, Fifa’s English president, had alienated them all by resolutely supporting white South Africa and João Havelange took full advantage in the election of 1974.

Professor of African History at Michigan State University Peter Alegi has described this as a key moment in the democratisation of Fifa, but it also coincided with Africa’s greatest humiliation at the tournament.

Having seen how Ghana president Kwame Nkrumah had successfully exploited the power and popularity of the game, Zaire president Mobutu pumped money into his country’s side. The team qualified but lost 2-0 to Scotland, then 9-0 to Yugoslavia. Before the third game, the players were told they would not be allowed to return home from Germany if they lost two Brazil by four goals or more. At 2-0, the Brazilians got a free and as Rivelino prepared to take it, defender Mwepu Illunga ran forward and hoofed the ball down the field.

“I panicked and kicked the ball away before he had taken it,” Illunga explained later. “Most of the Brazil players, and the crowd too thought it was hilarious. I shouted, ‘You bastards!’ at them because they didn’t understand the pressure we were under.”

They lost by just three goals in the end and got to go home but Mobutu reneged on all the commitments he had made regarding bonuses for qualifying and prevented those who had offers from moving abroad. The public, meanwhile, turned against the team because of the well-publicised promises of houses and cars they had received.

Players said their lives were never the same again. “We were all scorned, neglected,” said striker Mayanga Maku, years later. “People didn’t like the fact that we were pampered by the president. Today the players live in misery.”

The issue of bonuses has been a recurring theme at tournaments ever since. Cameroon’s squad refused to get on the plane to Brazil four years ago until the issue was resolved while the Ghanaian association had to fly in more than $2.5 million in cash in order to resolve a dispute that threatened to escalate into a strike. This time around Fifa is paying a substantial portion of tournament prizemoney up front in the hope of avoiding similar problems.

The amounts sought by the players would not be considered huge to the teams’ bigger stars, but according to Mark Gleeson, a South African journalist, historian and archivist: “If you look at say, Nigeria, some of those players would be battling to make a good living and many would have a large dependency system back at home, family members and others who they are educating or supporting in other ways. That would be a cultural thing in Africa and so many of them would see a World Cup as a payday.”

There is also, he acknowledges, resentment on the part of players towards those running federations who they routinely see as corrupt and self-serving.

Despite historical problems, though, African representation at the World Cup has grown substantially. Five of this tournament’s 32 finalists are from Africa, with that number set to increase to nine when the competition expands to 48 in 2026.

In terms of performance, three countries – Cameroon in 1990, Senegal in 2002 and Ghana in 2010 – have made the quarter-finals. Ghana came within a Luis Suarez handball of becoming the first African team to make the last four. Overall, though, progress remains slow. In 2014, two countries made it out of the group stages for the first time and Nigeria were the first to do so under an African coach. Few, however, are predicting a title in the remotely foreseeable future.

“I think as Africa sought to catch up with the world, the world imposed a sort mediocrity on its football,” says Gleeson. “All the coaching was necessary but ultimately it killed off the sort of ‘X factor’ that African players had. There isn’t much difference now between an African player and a player from anywhere else. They are both coached by people who watch Barcelona and the Premier League on TV. The people who predicted a World Cup win were basically saying ‘Wow, these guys can play and when they learn to play properly, they’ll be really good’, but the natural exuberance that prompted them to say that in the first place is largely gone now. That was inevitable – although to be honest, it never got them very far in the first place.”

The relationship with Europe and the European game has shifted too. European football is a huge attraction with televised games routinely eclipsing local competitions – a form of “electronic colonialism” according to Alegi. Some of the stronger African nations do have decent leagues but neither their federations nor their clubs can come close to competing with the riches or resources to be found on this side of the Mediterranean.

The last winners of the Africa Cup of Nations, Cameroon, for instance, received €3.4 million in prizemoney compared to Portugal’s €25.5 million for winning Euro 2016. The contrast is far more stark at club level. The winners of this season’s African Champions League will receive €2.1 million compared to the €89.5 million carted home from Kiev by Real Madrid. And that haul represents only 15 per cent or so of the Spanish club’s income for the year.

“Some of the leagues – South Africa and a few of the north Africans ones – are quite good,” says Ian Hawkey, journalist and author of Feet of the Chameleon, the Story of African Football. “They provide a route for players from around the continent to progress but they can’t compete with the European academies so the best players leave at 14 and many countries increasingly rely on the members of their diaspora produced at big clubs.”

At the last World Cup, 16 of the 23 Algerian players were born in France. This time Morocco have gone even further, with just six of the squad going to Russia born at home. Two of the last three African Footballers of the Year were born in Europe, something that is bound to affect the status of the “superstars” back at home.

The continent’s profile in Russia may be hit by the injury suffered by Egypt’s man of the moment Mohamed Salah in the Champions League final, but none of the five sides look well-equipped to make much of an impact on this summer’s tournament. Hawkey points to the goalkeeping problems faced by all of the five sides and, like Gleeson, believes that Morocco and Tunisia have been a little unlucky with the draw.

If Salah is fit and back to his best, Egypt may progress, while Senegal might otherwise be the best hope for a good-luck story. The wait for a World cup winner is set to continue for quite a while longer, though.

“I’d be astounded if there is another quarter-finalist this time,” says Gleeson, “and for an African side to break new ground and make the semis this time would simply be incredible.”