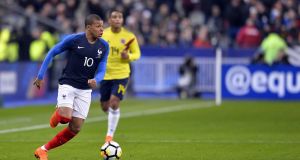 France are looking ominously good and undoubtedly the heavyweight outfit in Group B - the Les Bleus have legitimate hopes of winning the tournament providing Didier Deschamps can get the vast array of talent at his disposal working as one slick machine. A Christian Eriksen-inspired Denmark (let’s not go there) are second-favourites to progress while Peru will have their work cut out without banned captain Paulo Guerrero. Australia head into the tournament with new management and minimal expectations.

France’s passage was not without incident - including 0-0 draws at home to Luxembourg and away to Belarus, and a 2-1 defeat in Sweden. Denmark qualified thanks to a that 5-1 play-off win over Ireland, while the Socceroos needed play-off wins over Syria and then Honduras. Peru finished fifth in South American qualifying before coming through a play-off against New Zealand.

France were victorious on home soil in 1998, Les Bleus uniting a nation with victory over Brazil in the final. Denmark and Peru have both made it as far as the quarter-finals and Australia have reached the knockouts once in four attempts - cruelly being knocked out by eventual winners Italy in 2006.

Deschamps guided France to the World Cup quarter-finals in 2014 and then the Euro 2016 final - this summer, however, feels like his acid test and a serious challenge is required. Age Hareide’s Denmark are reliant on Eriksen, but he has crafted a team who aren’t entirely a one-man band. Ricardo Gareca masterminded Peru’s first qualification for 36 years, while Bert van Marwijk took the ropes with Australia following the resignation of Ange Postecoglou, who stood down two weeks after securing qualification.

France could prove a joy to behold and the electric Antoine Griezmann and Kylian Mbappe are primed for big summers. Denmark’s hopes making it through the group stages will rely on Eriksen, while Australia have decent midfield options - particularly Aaron Moy and Tom Rogic. Guerro’s ban for a failed drugs test - and ultimately doomed appeal - means Jefferson Farfan will shoulder the brunt of Peruvian hopes.

France are the group’s standout team and should win it at a canter - expect an Eriksen-inspired Denmark to join them in the last 16.

1 Ireland backrow of O’Mahony, Van der Flier and Stander to be retained against England
2 Triple bogey costs Rory McIlroy as Adam Scott prevails at Riviera
3 On healing and wild hurling: The re-education of Diarmuid Lyng
4 Few, if any, have given as much to Munster as Garrett Fitzgerald
5 Solskjaer unable to say if Paul Pogba will play for Manchester United again
Real news has value SUBSCRIBE
Crossword Get access to over 6,000 interactive crosswords