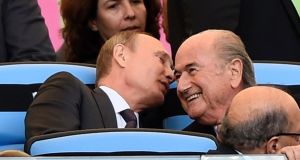 Russian president Vladimir Putin and then to Fifa president Sepp Blatter during the 2014 World Cup final between Germany and Argentina at the Maracana stadium in Rio. Photograph: Reuters/Dylan Martinez

In 1946, a US diplomat in Moscow sent a 5,500-word memo to his masters in Washington outlining his understanding of the psychology of the Soviet leadership. Reading George Kennan’s “Long Telegram” 72 years on, you are struck by how contemporary much of it sounds.

Kennan described “a police regime par excellence, reared in the dim half world of Tsarist police intrigue, accustomed to think primarily in terms of police power,” which commanded “an elaborate and far-flung apparatus for exertion of its influence in other countries, an apparatus of amazing flexibility and versatility, managed by people whose experience and skill in underground methods are presumably without parallel in history.”

Moscow aimed “to set major Western powers against each other. Anti-British talk will be plugged among Americans, anti-American talk among British. Continentals, including Germans, will be taught to abhor both Anglo-Saxon powers. Where suspicions exist, they will be fanned; where not, ignited.”

Relations with the Soviets would be complicated by an atmosphere of ubiquitous cynicism and mistrust, “the unsolved mystery as to who, if anyone, in this great land actually receives accurate and unbiased information about outside world. In an atmosphere of oriental secretiveness and conspiracy which pervades this government, possibilities for distorting or poisoning sources and currents of information are infinite. The very disrespect of Russians for objective truth – indeed, their disbelief in its existence – leads them to view all stated facts as instruments for furtherance of one ulterior purpose or another.”

It seems remarkable that an ancient memo written in a completely different world, when the Cold War division of the globe into Communist and capitalist armed camps was starting to take shape, should contain so many passages that sound as though they could have appeared in a think-tank paper on Putin’s Russia from the last couple of years.

Everything has changed and somehow nothing has changed. Kennan might not be surprised, since he argued that the outlook of the Soviet leadership was influenced by historical forces older than the Revolution, some of which may still exist today.

“At the bottom of Kremlin’s neurotic view of world affairs is traditional and instinctive Russian sense of insecurity,” he wrote. “Originally, this was insecurity of a peaceful agricultural people trying to live on vast exposed plain in neighborhood of fierce nomadic peoples.

To this was added, as Russia came into contact with economically advanced West, fear of more competent, more powerful, more highly organised societies in that area. But this latter type of insecurity was one which afflicted rather Russian rulers than Russian people; for Russian rulers have invariably sensed that their rule was relatively archaic in form, fragile and artificial in its psychological foundation, unable to stand comparison or contact with political systems of Western countries.

Kennan’s argument about Russian rulers’ sensitivity to unflattering comparisons with foreign systems is applied to the current Russian government by both domestic and international critics, who argue that President Putin’s overriding priority is to head off any possibility of Maidan-style popular protests that could topple his regime.

Yet in December 2010, after Russia had won the right to stage the 2018 World Cup, then prime minister Putin seemed to be embracing the idea of “direct contact”, of Russia and “the world without” learning more about each other.

Putin said that Russia wanted “to show we are an open and transparent country to the world. [Travelling fans] will see a lot of stereotypes from the previous times, but the more contact we have the more these stereotypes will be destroyed. The 2014 Sochi Olympics and the World Cup will promote the implementation of this task. Our country lives without visible and invisible Berlin walls.”

Even as Putin spoke, a narrative was emerging that Russia’s success had been yet another demonstration of their historic “experience and skill in underhand methods”, with the frustrated English delegation claiming that ExCo voters had mysteriously switched sides to back the Russian bid on the morning of the vote. Few were surprised by the news in 2014 that Russia could not provide much assistance to Michael Garcia’s inquiry into Fifa corruption because the rented computers their bid team had used had since been destroyed, along with the bid email accounts and other records.

The Sochi Olympics did not play out as Putin had hoped. Far from destroying negative stereotypes about Russia, it reinforced them. In the build-up to the Games it was widely reported that Russia had somehow managed to spend $51 billion preparing the facilities. Former deputy prime minister Boris Nemtsov published a report suggesting that up to $30 billion of the budget had been siphoned off into embezzlement and graft (Nemtsov was assassinated in Moscow in 2015).

No sooner had foreign journalists arrived in Sochi than their social media feeds lit up with pictures of substandard infrastructure – unfinished hotel rooms, toilets installed side-by-side and so on. Much of their coverage would focus on the injustice of Russia’s 2013 law banning “the promotion of non-traditional sexual relationships to minors”. And those Games are now chiefly remembered for the exposure in late 2014 of Russia’s systematic, state-sponsored doping programme.

So Russia emerged from the Olympic experience widely portrayed as a corrupt mafia state that was also incompetent and homophobic. It was perhaps the most spectacular PR disaster in the history of sporting mega-events.

Since then, Russia’s international image has only worsened. Within a week of the end of the Sochi Games, Russian special forces had moved into Crimea, and within a month Russia had formally annexed the peninsula. There followed Russian incursions into eastern Ukraine in support of separatist rebels and then, in July 2014, the shooting down of Malaysian Airlines flight MH-17 with the loss of 298 lives. An international investigation announced last month that it believed the plane had been shot down by a Russian anti-aircraft battery based out of Kursk. Russia’s ministry of defence denied any such weapons system had crossed the border into Ukraine.

More than 10,000 have died in the war in Ukraine but neither that conflict nor Russia’s pro-Assad military intervention in Syria is the number one factor currently poisoning perceptions of Russia in the West. That would be the allegations of Russian interference and subversion that have convulsed the American political system since the election of Donald Trump. And there has been a series of bizarre and disturbing intrigues, such as the Salisbury poisonings, or the recent faking of the death of the Kiev-based Russian journalist Arkady Babchenko, that have inflamed the suspicion towards everything Russian.

All of this means that 27 years after the Soviet Union formally ceased to exist, the image of Russia in the West is as bad as it has ever been. Russia is simultaneously portrayed as newly assertive and fearful, sophisticated and backward, crafty and stupid. Foreigners have been conditioned to expect the worst. Many journalists with Western media organisations will travel to this World Cup with cheap laptops and burner phones intending to discard them immediately after the tournament, to reduce the chances of being hacked by the Russian security services. Prudence or paranoia? These organisations have decided it’s better to be safe than sorry.

Thousands of foreign fans will travel fearing they might be shaken down by corrupt policemen or beaten senseless by xenophobic hooligans, whose scary image has been burnished by two years of breathless post-Marseille reportage on their thuggish prowess and their set-piece battles, deep in the dark and mysterious forests of dark and mysterious Mother Russia.

And therein lies Russia’s last remaining hope that hosting this World Cup might not turn out to be a complete waste of time and money. The World Cup attracts many times more foreign visitors than the Winter Olympics, and rather than being confined to one overpriced southern resort these visitors will fan out all over the country: they can’t avoid coming face to face with the real, everyday Russia.

Maybe the foreigners, fans and media alike, will arrive with expectations so low that they will end up being pleasantly surprised. Maybe they will go there braced to negotiate a shadowland of violence and treachery, and find instead a country much like any other, where the sun shines and the beer flows as it does everywhere else. Maybe they will come back saying, ‘you know what? Russia really isn’t as bad as all that’. And maybe after all the terrible things that have happened over the last few years, with all the cranking up of mutual suspicion and hostility, this would be as positive a World Cup legacy as could be hoped for.

1 Solskjær praises Martial for building himself into ‘powerhouse’ centre forward
2 No final round heroics for Rory McIlroy at US PGA
3 Ronnie O’Sullivan beats Ding to reach Crucible last eight
4 Liverpool to sign Olympiakos left back Kostas Tsimikas
5 Ben Stokes to miss rest of Pakistan series due to family reasons
Real news has value SUBSCRIBE
Crossword Get access to over 6,000 interactive crosswords