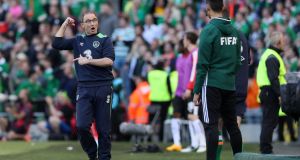 Ireland, who trailed 1-0 with just five minutes remaining at the Aviva Stadium, levelled through Jonathan Walters and then thought they had won it through Shane Duffy, only to see his header ruled out for a foul by the official, who also waved away Walters’ appeals for a penalty.

Following the 1-1 draw O’Neill said: “I’m delighted to have got the equaliser and I thought that we had a legitimate, good goal disallowed. The referee wasn’t totally to blame for our performance in the first half, but I thought he was very poor in the game.

“Considering he was letting things go during the course of the game — that’s fine, I like referees who let things go — but he seemed to be penalising us a great deal.”

Duffy’s effort, which would have put the Republic seven points clear of Group D rivals Austria with just four games to play, was chalked off when the official ruled that defender Stefan Lainer had been fouled, and Borbalan was also unimpressed when Walters went to ground under Aleksandar Dragovic’s challenge.

O’Neill said: “I’ll tell you something now: there might have been a player called Andy Gray who wouldn’t have scored a goal. They’d have to take almost 400 goals off him.

“When he (the referee) first pointed, I thought he’d obviously given it. The linesman is halfway up the pitch — he’s closer to me than he is to the game. Once or twice, I was close to him as well.

“Listen, I can’t change it. I thought it was a good goal and funnily enough, Jon Walters, it is a penalty, he’s caught his foot.”

Midfielder James McClean was equally disparaging about the referee’s performance.

He told RTE: “I know in this day and age, you get fined (for criticising referees), but you watched the game, you tell me.

“They (Austria) had a 12th man today. That’s all I’ll say on that. I’m really disappointed because we should have come away from that game with three points, but we didn’t.”

While Ireland ultimately had to settle for a 1-1 draw, it is more than they looked like getting after a dreadful first-half performance during which Martin Hinteregger’s sweet strike handed the visitors a deserved lead.

However, O’Neill’s men improved substantially after the break and Walters’ equaliser earned them a point.

O’Neill said: “We had a very, very tough first half, I thought Austria were better than us. We had a very poor opening 15 minutes, put no real pressure on Austria and allowed them to get into the game, almost taking the crowd out of the scenario.

“We couldn’t really create anything in the game, and I was a bit surprised about that because we had talked a couple of days ago about trying to get started very, very early in the game and trying to be on the front foot.”

Austria coach Marcel Koller was philosophical after seeing victory snatched from his grasp at the death.

He said: “Ireland were playing at home and we think they are happy with the draw because it keeps us at a distance. We weren’t under so much pressure in the first half, but we knew the pressure would come.

“It was a very intense game and we played especially well in the first half and managed to score.

“In the second half, Ireland put us under pressure and we lost the ball too easily, but we still had chances to score the second goal. But we were also lucky not to concede a goal.

“There are still 12 points to earn in qualification and we will try to get as many as possible.”