Ken Early: Streetwise England a further step along the road

Ken Early at the Spartak Stadium 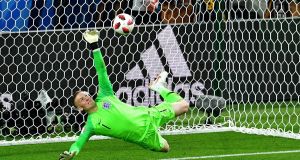 England goalkeeper Jordan Pickford saves Carlos Bacca’s penalty during the penalty shootout with Colombia in the World Cup Round of 16 match at the Spartak Stadium in Moscow. Photograph: Mladen Antonov/AFP/Getty Images

As the clock ticked towards the 90th minute at the Spartak Stadium, thoughts inevitably drifted to what lay ahead for England. Next up would be Sweden on Saturday – stolid, uninspired Sweden – before the semi-final against feeble Russia or little Croatia. Not one of the classic runs, perhaps, but there’s no need to apologise because for once the pieces have fallen in your favour. Nobody blamed Germany in 2002 for only beating Paraguay, the United States and South Korea on the way to the final.

In fact, England had seen this win out like a classic Germany side – old-fashioned, realistic Germany. They had been controlled, composed, and easily the better side.

Without James Rodriguez to see the space and imagine their moves into being, Colombia’s attack had short-circuited. Radamel Falcao, a striker who was past it in 2014, was unable to threaten the space behind England’s defence, while Juan Quintero, the tiny inside forward, showed why he is playing his club football in the Argentine league. Juan Cuadrado had the speed to penetrate, but he was the one trying to pick the passes when he should have been the one running on to them.

The sole impressive aspect of Colombia’s play had been the way the gigantic Yerry Mina rose to head away defensive corners. At half-time, which had come without Colombia creating a single chance, the thought had occurred that an attacking corner or set-piece that Mina could jump for might be their best chance of actually scoring a goal. And yet as five minutes of second-half injury-time began Colombia had not even managed to force a single corner.

There were five minutes of injury time because Colombia had wasted so much time protesting against a penalty awarded when Carlos Sanchez jumped on Harry Kane’s back at an England corner. The Colombian fans chanted “VAR! VAR!” but they hadn’t seen the replay. Kane smashed it down the middle for his sixth goal of the tournament.

Colombia spent the match enraged by their own impotence, and England had craftily stoked their fury with a combination of time-wasting, subtle goading and holier-than-thou appeals to authority. No individual did more to wind up the Colombians than Harry ‘Diego Simeone’ Maguire, who famously went to Euro 2016 as a fan, but here gave a masterly display of the dark arts, using his prodigious height to draw giant VAR screens in the air above angry Colombian heads, and even going so far as to throw in a dive, looking for a penalty, for which he naturally escaped a booking.

There is nothing more humiliating to a South American team than being made to look foolish by England. England’s new worldliness, their guile, was surely further testament to the great work Gareth Southgate had done with this side. Growing up, coming home . . .

So unthreatening were Colombia that the likeable and elegantly waistcoated Southgate could, were he just slightly less professional than he is, have indulged in a spot of reverie . . . Perhaps in a few weeks the first delegations would start arriving – from Germany, from France, from Italy and Spain – fact-finding missions from foreign football federations, eager to study the world-conquering “English model”, that they might bring it home to their own countries and plant there the golden seeds . . .

After years of England trying to copy Holland, or Spain, or France, the tables would finally, gloriously turn. Imagine the technical study groups reporting in Cologne or Madrid: “Our findings indicate that the secret to winning the World Cup is to sell off your local pitches to property developers, don’t muddle the picture by training too many professional youth coaches, but let the invisible hand of the market take care of player development, herd all the best young players into big-club academies where they make lots of money but struggle to get any experience of first-team football because the financial stakes in the Prem are simply too –“ OH MY GOD WHAT THE HELL WAS THAT?

Out of absolutely nothing, Mateus Uribe had smashed a sudden strike that seemed to have behind it all of Colombia’s pent-up fury and frustration, a sensational shot from 30 yards that flew over everybody and looked destined for the net until Jordan Pickford flew to tip it away for a corner. Colombia’s first corner. The first chance Mina would have to outjump the England defence. The last chance Colombia would have to rescue this game. And somehow it suddenly felt like quite a good chance.

When Mina’s header inevitably hit the net it felt as though a very different story was taking shape – the eternally recurring story of England’s World Cup destiny, half-tragedy, half-farce that no amount of preparation, likeability, or doing things differently could ever change.

Extra time was controlled by Colombia but in much the same impotent way as they had played for the rest of the match. They were happy to take the penalties. But looking at England you could see they were happy too. Relieved, even. England, with the worst penalty shootout record among major football nations, relieved to get the chance to relive the nightmares of their ancestors?

But many of those ancestors subscribed to the view that you can’t replicate the pressure of the shootout. Marcus Rashford had spoken during the week about how this England side was different. They had started preparing for penalty shootouts at the end of 2017. It was a skill, Rashford said, not a lottery, and England would be ready.

Colombia won the toss. According to Soccernomics by Simon Kuper and Stefan Szymanski, the team that goes first in the penalty shootout has a 60 per cent chance of winning. That’s the kind of statistic England certainly would have learned in their detailed penalty preparation. The knowledge might suddenly have seemed less than helpful.

The score was 3-2 to Colombia when Jordan Henderson came forward juggling the ball, the way he once did in that video of him as a kid in Sunderland, showcasing his skills for the scouts. What could have been more nonchalant, more casual? Everyone in the stadium immediately sensed he was going to miss. In front of the press box, James Rodriguez grabbed Esteban Cambiasso’s arm in anticipation. David Ospina saved and Colombia had the advantage.

Then Uribe came forward. The man whose thunderbolt had jolted Colombia back to life. He went for another thunderbolt. Wrong choice. This one smashed against the crossbar and out.

Kieran Trippier was up next. No mistake. Last up for Colombia was Carlos Bacca. This was a great time for Pickford to make his first save of the shootout. Now Colombia were at the mercy of Eric Dier. An Englishman brought up in Portugal, schooled in foreign ways. He finished it like Ronaldo. Football’s long and winding road home passes through Samara next Saturday.