The history of France v Uruguay

From the 1924 Olympics in Paris, to their World Cup stalemate at the 2010 World Cup 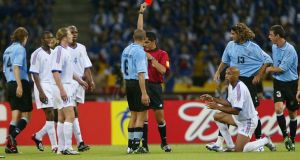 Thierry Henry is sent off at the 2002 World Cup. Photograph: Getty Images

Four of the countries’ eight meetings have ended goalless. But their clashes have seldom been boring and often pivotal. Reputations have been made. Or ruined . . .

The four stars on the jerseys worn by Luis Suárez and chums denote Uruguay’s pair of World Cup triumphs (1930 and 1950) and their back-to-back Olympic gold medals, the first of which was won in Paris in 1924. Uruguay had swept to victory in the previous year’s South American championship but this was their first trip outside their continent and little was known about them in Europe. But they seemed like nice chaps so a Yugoslavian player felt moved to apologise in advance for beating them in the first round. He was sorry, all right, when Uruguay won 7-0.

La Celeste followed that up with a 3-0 victory over USA. Now Europeans fawned over their impeccable technique and slick passing – “it is stylistic perfection” declared La Gazzetta dello Sport – and the French public became so enamoured of one of their players, the elegant midfielder José Leandro Andrade, that local media nicknamed him the Black Marvel.

Uruguay appreciated the hospitality in Paris – particularly by Parisiennes – to such an extent that they reputedly agreed between themselves to go easy on France in the quarter-final and settle for a single-goal win. That’s how things were shaping up until a point in the second half when, with Uruguay leading 2-1, Andrade fouled a Frenchman, after which he was jeered by the home crowd every time he touched the ball.

Quelle erreur! Andrade, who had risen from poverty and been a carnival violinist, among other things, was a bon viveur off the pitch but a classy performer on it and had such a sense of decorum that he viewed celebrating goals as crude triumphalism. So being jeered incited him to teach the locals a thing or three. Sashaying through the home defence, he teed up a salvo of goals and inspired Uruguay to a 5-1 win. They then beat the Netherlands and Switzerland to take the gold medal. Four of members of the squad, including Andrade, won it again four years later and also lifted the inaugural World Cup in 1930.

The countries renewed acquaintances in London’s White City stadium for a clash in a group that also included the World Cup hosts. Uruguay had opened their campaign by becoming the first team for 17 years to stop England from scoring at home, holding Alf Ramsey’s side to a 0-0 draw with a display of defensive fortitude that appalled and impressed the home crowd. “No doubt if I had to watch Uruguay in action every week I should soon be looking for a more interesting job,” wrote Douglas Saunders in the Daily Telegraph. “That does not alter my view that they adopted the correct policy last night and employed it with admirable efficiency.”

In their next game, against France, Uruguay had to go on the front foot after falling behind to a contentious early penalty, awarded for a foul committed outside the box. The spot-kick was converted by Héctor De Bourgoing, who, after much wrangling, had obtained permission from Fifa to play for Les Bleus after representing Argentina, where he was born to an aristocratic landowning family with French roots. But France did not stay ahead for long, falling behind to strikes by Pedro Rocha and Julio Cortés.

“It was no more than justice that the Uruguayans drew level after 26 minutes and took the lead six minutes later,” wrote Albert Barham in the Guardian, who saw Les Bleus’ pallid display as evidence of a wider malaise. “Once proud France showed, perhaps, the decline that has overtaken their football at club level … they were again so disappointing as to be almost untrue.” France went on to lose 2-0 to England while Uruguay advanced to the quarter-finals, where their defensive rigour came undone in a 4-0 mullering by West Germany.

The Artemio Franchi Trophy, named after the Uefa president killed in a car crash in 1983, was a forerunner of Fifa’s Confederations Cup, pitting, on two occasions, the champions of Europe against the kings of South America. France swaggered to the first intercontinental title with a 2-0 victory that suggested they were even better than when their “magic square” guided them to glory at Euro 84.

Michel Platini was still conducting them with exquisite grace but now they also had a genius up front: the 24-year-old Nantes striker José Touré, who had missed the Euros through injury. Nicknamed “the Brazilian”, Touré scored a delicious goal against Uruguay and generally enraged them with his elusiveness and skill. “The more times Touré was hacked down, the greater his appetite for running at defenders became,” reported the Guardian’s David Lacey, adding that Touré’s presence in an already gifted side would make France the world’s darling at the following year’s World Cup. “When [TOURÉ]hooked the ball past Rodríguez, you could not help wishing the French well,” wrote Lacey.

France later reached the semi-finals in Mexico – and might have gone farther if Touré had not missed the tournament through a serious knee injury which triggered a descent into decadence and ruin. As for Uruguay, they went to the World Cup and kicked the legs off everyone they met, leading Ernie Walker of the Scottish Football Association to denounce them as “cheats and cowards … the scum of world football”.

This time France, the reigning European champions, were the aggressors. Apparently a shock defeat by Senegal in their opening World Cup match turned hubris and frustration into something even more sinister, transforming Thierry Henry into a hatchetman. The striker, who went into the tournament as the Premier League’s top scorer, was sent off in the first half for lunging at Marcelo Romero’s ankle. Both sides bungled chances and, in the end, neither qualified from the group. France had travelled to Asia as favourites but returned without having even scored a goal. It was embarrassing. But not a disgrace. That would come eight years later.

The atmosphere in the French camp stunk in the days before kick-off in the countries’ first match at the World Cup in South Africa. “I’m fed up with this collective inertia,” France’s manager, Raymond Domenech, wrote in his diary, in which he detailed a few of the rivalries, strops and grievances that players had with each other and with him and which prevented any proper training from getting done. “All I want is to tell them to piss off,” he added. “Let them sort their shit out for themselves.” It never got sorted by anyone. It accumulated until everyone got splattered.

The match against Uruguay started badly for France – Sidney Govou slashing wide from six yards – and never got better. But the 0-0 draw turned out to be the high point of their tournament. After that came defeats by Mexico and South Africa; the banishment of Nicolas Anelka following a row with Domenech; a public fight between Patrice Evra and the team’s fitness coach, Robert Duverne; a player mutiny; and a global scandal that made Uruguay seem like fine upstanding fellows even while Luis Suárez was slapping a Ghana shot off his line to help his team reach the semi-final.

1 Kevin McStay: Maybe a knockout All-Ireland Championship is the long-term solution?
2 Former France and Stade Francais winger Dominici has died aged 48
3 No further players to be called up to Ireland squad to face Georgia
4 Gerry Thornley: Ireland don’t want to box themselves into a corner
5 Owen Doyle: Ireland suffered from officiating of the breakdown
Real news has value SUBSCRIBE
Crossword Get access to over 6,000 interactive crosswords