James McClean does it again as Ireland book playoff spot 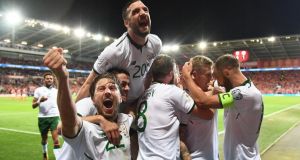 James McClean (second from right) celebrates scoring his goal with his Republic of Ireland team-mates during the World Cup qualifier against Wales at Cardiff City Stadium. Photograph: Stephen McCarthy/Sportsfile via Getty Images

For countless generations the Irish have been passing through Wales en route to what they hoped would be better times in brighter lights. In the circumstances, perhaps the locals should have seen the outcome here coming.

At the end of what amounted to a playoff for a playoff, though, Chris Coleman, his players and the bulk of the capacity crowd at the Cardiff City stadium were clearly stunned to have had their own journey to next summer’s World Cup in Russia cut so suddenly short.

James McClean’s fourth goal of the campaign was the difference between the two sides as the final whistle sounded and an end was brought to a contest in which the Irish had clearly pushed themselves to their physical limits.

Wales, who last year easily beat a Belgium side that had played Ireland off the park at the European Championships, simply could not cope with the determined drive of their opponents here and through the closing stages just a little of the shine was taken off ‘the golden generation’ as they, like so many more ordinary sides, were reduced to hoofing the ball hopefully into an opposition area.

That, it quickly became apparent, was not the way to break the resistance of Martin O’Neill’s side but without the brilliance of Gareth Bale to call upon, the Welsh simply could not come up with a better plan.

It was a remarkable conclusion to a game that had started with Ireland on the back foot as their opponents set about them to good effect in the opening stages and clearly succeeded in unsettling them.

The Irish took some time to find their feet and while they were trying it was a little hard to believe that what we were witnessing was the game plan O’Neill had spoken about on Sunday being executed.

So you're saying there's a chance 🇮🇪 pic.twitter.com/A0oklIWcAm

The home side, it seemed, had complete control of the flanks and the Irish seemed incapable of pushing the game much further forward than the edge of their own heavily populated box, while the air of sometimes desperate improvisation about some of their clearances meant there may have been spectators in the seats either side of the Irish area who were seeing more of the ball than Daryl Murphy.

If Ireland’s football teams only earned points on the basis of the beauty of their game, though, the supporters would not have quite so many stamps on their passports and while it didn’t get any prettier here, they certainly settled, doing more to limit the scope of the home side’s full backs to get forward and closing down opponents with sufficient speed and determination to make life more than a little difficult for Coleman’s key players.

There were times when the Irish players rode their luck a little with Brady among those clearly intent on riling opponents and Wales lost Joe Allen eight minutes short of the break as it became clear he was not going to shake off the clattering he took when McClean and David Meyler sandwiched the midfielder as he tried to gather the ball.

Others settled for simply ‘putting themselves about,’ although the referee’s patience began to run out in the closing stages and Meyler eventually picked up the booking that will keep him out of the first leg of next month’s playoff. McClean can consider himself lucky to be available for the game.

After a decent save early on, Darren Randolph found himself having to intervene at fairly regular intervals to tidy up in front of him but as the first half progressed gradually there were signs too that Ireland were beginning to set their sights on the other end of the pitch. In the space of seven minutes Jeff Hendrick squandered what looked like a half-decent chance after a long throw-in from the right was poorly dealt with and Shane Duffy narrowly missed the target with a shot from the edge of the area.

Ireland started to retain the ball a little more successfully but the old pattern of the team working their way steadily backwards before launching it long persisted and the Welsh had plenty of possession to work with; they simply couldn’t seem to find a way to make something meaningful of it.

Joe Ledley’s early influence waned and Aaron Ramsey made only the occasional contribution of any significance while it was Jonathan Williams who created his side’s best chance of the game eight minutes into the second half when he got out wide on the right and crossed the ball for Hal Robson-Kanu whose powerful angled header from close range was brilliantly turned over by Randolph.

The visitors bettered that, though, four minutes later when Hendrick’s pressure on Ashley Williams paid dividends and the midfielder then produced a low cross almost from the corner flag that Harry Arter stepped over and McClean drove home sweetly with a first time right-footed shot that left Wayne Hennessey completely flatfooted.

The Irish sections of the crowd erupted and the Welsh, for a few moments were silenced. The home team prepared to go again as their opponents shaped up to dig in. What followed might have become a siege had it not been for Duffy’s almost singlehanded success in repelling the aerial bombardment.

They Welsh kept at it through the closing stages, perhaps unaware that with Serbia winning they were chasing a goal that would do more than consign both sides to a summer at home. Ireland survived, though, and there reward will be to do it all again next month when once again, the odds are likely to be against them.

1 World Rugby study advises removal of reset scrums to reduce Covid-19 risk
2 Sideline Cut: Vignette shows why Bird is the true shark in The Last Dance
3 Rory McIlroy now realising the power his words carry as world’s number one
4 What became of Celtic’s Lisbon Lions?
5 US sorry, but not too sorry
Real news has value SUBSCRIBE
Crossword Get access to over 6,000 interactive crosswords