Martin O’Neill and Ireland counting on final twist of fate 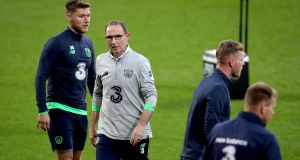 Martin O’Neill insists that he always knew Ireland’s hopes of progressing from this World Cup group might come down to the last kick of the game against Wales.

But seriously, who could have imagined it would take Slovenia drawing with Scotland to put Slovakia into second spot in another group just to ensure that his side still even have something to play for.

That, though, is precisely what happened at the Stozice Stadium in Ljubljana yesterday. Fate, you might say, has done Ireland a favour. It is now down to O’Neill and his men to complete their great escape.

The win over Italy at Euro2016 is, unsurprisingly, the manager’s blueprint as he heads into another game which Ireland must win if they are to save themselves. Getting his players to perform at that level again will be no easy feat. We know that because if they had even come close to it in a competitive game this year then they would probably not be in quite such a tight spot now.

“We’ve got 90 minutes in which to try to get a goal,” said a visibly tense O’Neill at his pre-match press conference at the City of Wales stadium.

“I think our approach will be quite similar to the one we had against Italy in Lille where we knew that a win was the only thing that mattered to us and I thought we played with a lot of verve, a lot of determination.

“We closed Italy down very quickly and a lot of that will be necessary tomorrow night. We created some chances and finally took one with five minutes to go. It’s not that far back that the players shouldn’t consider it as they approach this game.”

Notionally, at least, the win could be enough for Ireland to top their group although Serbia would really need to lose at home to Georgia. A draw in that game would be enough to allow the Welsh in for top spot if they can win tonight in Cardiff but the Irish would have to win by five to capitalise on a stalemate in Belgrade. O’Neill dismissed the first outcome as implausible and didn’t even feel the need to even acknowledge the possibility of the second.

Instead, the impression was clearly that he envisages a hard-fought game in which a win for either side will be by a narrow margin.

The Welsh, as it happens, have all the momentum as Chris Gunter alluded to yesterday. But both managers acknowledged the potential for the peculiar, winner-takes-all nature of the evening and derby feel to the game to negate everything thing that has happened since the fortunes of the two sides started to invert around the halfway point in the campaign.

Recent form does suggest Chris Coleman has the greater cause for confidence that his side can come through this latest test. The team have big results of their own to point to and a better run in France last year. The absence of Gareth Bale, of course, is an issue but the Welsh are unbeaten without him this year and even maintaining that run would be fatal to Ireland’s ambitions.

O’Neill again made the point that he is without Séamus Coleman but he does have James McClean and Robbie Brady back. Both will surely be accommodated and while Callum O’Dowda looks set to free up one starting spot by reverting to the bench, perhaps the biggest question hanging over O’Neill’s team selection is whether Wes Hoolahan and the Burnley midfielder are both accommodated in the same side.

The 35-year-old’s performance on Friday underlined how positive a creative force he can be for the team on a good night but there will inevitably be concerns about the defensive side of things and the price that must be paid to retain him.

Dropping Shane Long and slightly reshuffling the formation would make it all possible but it is difficult to know which way O’Neill will go. He has started both just once this year, against Serbia, but it was a feature of the side that won in Vienna. Against Italy, Hoolahan laid on Brady’s late winner eight minutes after coming off the bench.

How Hoolahan came through the Moldova came might actually decide the issue and the manager gave little away about how any of his players have been through the weekend.

James McCarthy and David McGoldrick are out, it was confirmed, but the “few knocks and brusies,” that he said are being nursed by others are just so many more things to go into the mix.

Coleman is bound to be weighing similar matters himself and the Welsh coach could make changes to the team that won, though not especially well, in Tbilisi where it took a slightly special Tom Lawrence goal to separate the sides. David Edwards and Hal Robson-Kanu are amongst the contenders to come in.

It is, the former Fulham manager said, a special time for his side and for Welsh football generally and who could argue with him. If O’Neill can get things right again, though, and his players can contain the likes of Aaron Ramsey and Joe Ledley and conjure up a goal then it might yet be a very special night for the Irish.

It has been a slightly strange journey for O’Neill and his players to even get to this point. It would be an unforgettable one if they could go the rest of the way.

1 Owen Doyle: Creeping professionalism of schools rugby a threat to the game
2 Rugby under threat; Niall Quinn steps into FAI breach
3 Scotland’s Finn Russell missed training after Sunday drinking session
4 Niall Quinn happy to step into the breach at FAI
5 GAA officials and referees brace themselves as new rules kick in, and this time it's for real
Real news has value SUBSCRIBE
Crossword Get access to over 6,000 interactive crosswords