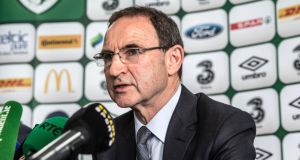 Republic of Ireland manager Martin O’Neill speaking at the squad announcement yesterday for the games against England and Scotland. Photograph: INPHO/Dan Sheridan

The question of Jack Grealish’s international future looks more uncertain and will hang over Martin O’Neill into next season after the 19-year-old Aston Villa player turned down the opportunity to be called into the senior Ireland squad for games against England and Scotland.

O’Neill spoke to the player yesterday morning having previously discussed the situation with his father Kevin, who appears to wield considerable influence over his son’s career.

The manager said afterwards he was “disappointed” with the player’s decision to decline the call-up, and while he insisted it would not be a barrier to him being involved at some future point he did not sound entirely convinced.

“I just wanted an idea,” said O’Neill at a press conference where he announced a preliminary squad of 33 players that includes Aberdeen striker Adam Rooney and Brentford midfielder Alan Judge.

“I really didn’t want to be putting pressure on him; I think that’s the main thing. [The idea was] that he’d come in for the week, get himself involved, and maybe it might just have topped off a really brilliant end-of-season for him. He might have been walking into the camp with an FA Cup medal. A winner’s medal. That is very possible, so he would have been on an absolute high. But if that’s not the case, that’s fine. ”

However, the Birmingham-born midfielder preferred to kick the whole thing back beyond the summer, with the manager suggesting that the teenager’s original declaration that he would be available to Ireland again in September probably no longer applying.

O’Neill was wary of being too frank about the difference between what is required to merit an Ireland call-up and an England one, but he hinted strongly more than once that he believes Grealish is still some way off featuring for England manager Roy Hodgson.

Even five or six weeks ago, he observed: “I didn’t think that he had played often enough in the side. He was getting on for the last 20 minutes, but you can either do brilliantly as a sub or not get a kick...that wasn’t going to tell me anything.

“Jack is still like every young player at that age. He’s still got lots to do. Roy [Hodgson] is dealing with experienced players and even the younger lads at this moment that he has are vastly more experienced than Jack at club level.”

Judge and Rooney, meanwhile, will embrace the opportunity to be involved with the squad in the event that they are not cut between now and June 1st, when the players are expected to gather in Dublin.

For Rooney this call-up is recognition for a season in Scotland where his 27 goals in all competitions helped Aberdeen to second place behind Celtic.

Judge, meanwhile, was a key player in Brentford making it to the Championship play-offs.

Robbie Keane is expected to have recovered from a groin problem that has sidelined him in recent weeks to play a part in the games, but Darron Gibson and Ciaran Clark both miss out through injury.

1 Sideline Cut: Vignette shows why Bird is the true shark in The Last Dance
2 Philip Browne admits funding model for Irish rugby is not sustainable
3 Zoom calls with Rory and the GUI bake-off: Neil Manchip keeping the flag flying
4 NFL invite Colin Kaepernick to workout for clubs to evaluate him
Real news has value SUBSCRIBE
Crossword Get access to over 6,000 interactive crosswords