Ken Early: Klopp’s way has something extraordinary about it 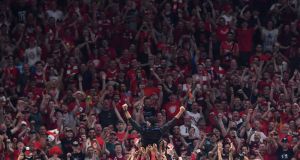 It is often said that you can tell more about someone’s character in defeat than you can in victory. Watch a few football managers take a postmatch press conference after they’ve just won or lost a Champions League final, and you might think otherwise.

The curious thing is that the defeated manager is always the same. Think of Jupp Heynckes in 2012, Diego Simeone in 2014 and 2016, Max Allegri in 2015 and 2017, Jurgen Klopp in 2013 and again in 2018, Mauricio Pochettino on Saturday night. A collection of very different personalities, each of whom had just watched his team lose the final in a different and more-or-less gut-wrenching way. Yet when they had to go and talk about it in front of a room full of reporters, each of them assumed the same air of wistful, dignified melancholy, acknowledging the pain of defeat, making a point of congratulating the winners, and expressing pride in their team’s achievement in reaching the final.

It’s striking that the behaviour is so uniformly “correct”, because we know how often managers are bitter or resentful in defeat. Maybe when they have lost on the biggest possible stage, they sense that there is no point in making it worse by crying about it. In this sad and vulnerable state, they all instinctively reach for the mask of sporting correctness.

It’s the winners who get to relax and show a bit of individuality. In 2014 Carlo Ancelotti arrived to his press conference already drenched in beer and champagne and laughed his way through his responses; so obvious was his delight that you almost felt bad the press questions were keeping him from his wine and premium pork products. In 2015 the winner was Luis Enrique – a more abrasive personality than Ancelotti – who took the opportunity to settle some scores with his critics, spelling out his vindication in a metallic voice of scarcely-suppressed anger. The next three years the winner was the coolly enigmatic Zinedine Zidane, who liked to flash his crinkly-eyed smile rather than say too many interesting things, but you could see how natural victory seemed to Zidane, and wondered how the world must look from his lofty vantage point.

Having seen Klopp be Mr Graceful In Defeat so many times you wondered what his victory persona would be like. A lot of us were probably expecting a kind of Hank Scorpio on ecstasy. Would he rip off his shirt? Dance? Sing? Rap?

In the end, the surprise was that Victory Klopp is one of the quietest and most serene of all the Klopps. No showy euphoria, no tears, not even any “HA HA HA!”. Instead he sat there and talked in a calm voice about other people.

What was the most satisfying thing about winning this trophy? “Jordan Henderson is the captain of the Champions League winners 2019, that’s satisfying.” He praised James Milner’s leadership, Alisson’s assurance under pressure, the Liverpool fans, the owners for not demanding instant success, Pochettino and Tottenham for their sensational season, and his family for supporting him through years of lost finals.

This relief was partly “for my family. They’ve been pretty close to me. Last six times we always flew on holiday with a silver medal, which doesn’t feel too cool.”

But there was also the relief of knowing that after almost four seasons at Liverpool – four seasons in which he has transformed the club from mid-table shambles to title contenders, reaching three European finals, never losing a two-legged European tie, and setting a new club record for points in the league – that now people will finally, at least for a little while, have to stop calling him a loser.

“We were talking the other day about my unlucky career,” Klopp said, referring to an exchange in Friday’s prematch press conference, when he had been asked if he believed certain managers were fated to be unluckier than others. “People can hear it like this, but I don’t see it. I think my life is much better than I expected it to be. Winning is good, it’s really cool. But it’s not so much winning – I’m interested more so in development. We are asked all the time about not winning. Well, now we won something.”

His tone on that last line suggested he didn’t believe the actual winning made much difference, and the logic is simple. If things had gone differently on Saturday night – if Son Heung-min had chipped a ball against Jordan Henderson’s hand to win Spurs a penalty in the first minute; if Lucas Moura had smashed in a late second goal after a set-piece scramble – it would not have changed a single second of the work Klopp, his staff and his players have done at Liverpool over the last four seasons.

It would only have changed the way the rest of the world talked about it, and about him. He would have been the trophyless wonder, the flop finalist extraordinaire, the seven-time loser. As it happens he is the Champions League winner, but either way he’d have been the same person, with the same body of work behind him, and the work would have been bad or good just the same, no matter what had happened on Saturday night.

Still, he knows the perception is important, even if he wishes it were otherwise. He knows he could never have said that the job is about development more than it is about winning if he had lost the final. It could have been just as true, and it would have sounded to everyone else like farcical, self-justifying nonsense.

But development is what he has been doing for four seasons, and development is why Liverpool – the same Liverpool that four years ago lost 6-1 at Stoke City in Steven Gerrard’s final game – have just won the biggest prize in club football. Of course the ultimate goal of any professional team is to win. Klopp just believes the best way to get there is to focus on unlocking the hidden potential of his players, both as individuals and as part of a collective that also includes the crowd.

This means his management style is less ruthless and more patient than many of his peers; he is less concerned with absolute technical quality than he is with attitude and personality. He has trusted and backed players whose quality, at different times, was doubted by much of the outside world – Henderson most of all, but also Milner, Roberto Firmino, Georginio Wijnaldum, Joel Matip, Alex Oxlade-Chamberlain, Divock Origi, the list goes on.

By trusting them and always emphasising their responsibility to each other and to the crowd that surrounds them, he has found a way to tap into and harness deep emotional currents. Somehow they all end up playing well for him. And you could see in the reactions of his players on Saturday night something beyond the usual respect and affection for a successful coach in the moment of victory, something that looked more like love.

And for Klopp, love is what football is all about. The mass celebrations on Saturday night in Madrid and yesterday in Liverpool were no mere happy accident. Scenes like this have followed Klopp wherever he’s gone – Mainz, Dortmund, and Liverpool – flags and songs, hugs and cheers, tears, togetherness and joy. Over the last 10 or 15 years there’s been no story quite like it in European football. Winning the Champions League could be taken as proof that his way of doing things has something extraordinary about it. But really, we knew that already.