Stephen Kenny's side will also meet Serbia, Luxembourg and Azerbaijan in Group A 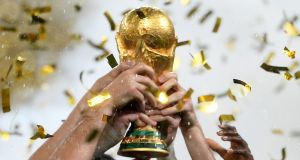 Luxembourg and Azerbaijan will complete the group.

“It is an exciting group. Portugal are the European champions and the Nations League champions, and Serbia of course have great pedigree,” Kenny said after the draw.

“Luxembourg are a vastly improved team, and Azerbaijan. So it is an exciting group, and the fact that it is a five-team group means we’ve not got the congested three competitive games in the window in March, so it means back to the more traditional two.

“It’s an interesting group for us. To lose to Slovakia on penalties (in the Euro 2020 playoffs) was difficult for the players. They worked so hard and performed so well on the night.

“It’s a new campaign and I think we’ll have a lot of players back from March, and I think that is exciting. We have to do our utmost to try to qualify.”

World champions France were handed an apparently comfortable draw when they were placed with Ukraine, Finland, Bosnia and Kazakhstan in European Group D.

The French recently beat Ukraine 7-1 in a friendly although their opponents were weakened by Covid-19 related absences.

Old rivals England and Poland will face each other again as they were placed in Group I while Spain must get past Sweden, who qualified for the 2018 World Cup at the expense of Italy, in Group B.

Italy themselves must face Switzerland, Northern Ireland, Bulgaria and Lithuania in Group C.

The qualifiers will take place between March and November next year. Qualification play-offs will be played in March 2022.

Those 12 teams will be split into three separate paths, with the winner of each booking a ticket to Qatar.

For the first time ever the World Cup will be played in November and December of 2022 to avoid the intense summer heat in the Middle East.