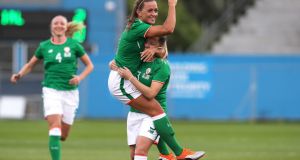 There might only ever have been a bit of consolation to be had from this final group game of the World Cup campaign but Colin Bell’s players grabbed what was going with four goals enough to secure their biggest competitive win in a couple of years.

A year on from their opening victory in Lurgan, this was a more composed performance and much more comfortable win with the hosts demonstrating their growing capacity to see off opponents who might well once have given the trouble.

A little more ruthlessness might have been more to the manager’s liking here for Northern Ireland were in trouble even before the last of the latecomers had taken their seats in the stand. The game, in fact, looked to be all but over as a contest within a quarter of an hour and there could certainly have been more goals.

With two of the six they’d managed in the seven previous group games having been scored by opponents, though, this was clearly evidence of ongoing progress. Leanne Kiernan, who scored two before being denied her hat-trick late on by the inside of Jacqueline Burns’ post, provided an exciting reminder of the impact she can make when in a position to do more than chase the tails of some of Europe’s best defenders.

“I think we’ve come on a lot,” said team captain Katie McCabe, who got the game’s other two goals, one of them from the penalty spot. “We’ve really found our feet in terms of how we play. Obviously we still have to progress, like any team we can improve a lot, but we are moving in the right direction.

“The idea in this game was to go out there and be confident on the ball; look for the forward pass, look for the forward runs. We have great pace in the team, Rianna (Jarrett) can hold it up, Leanne is a flyer and we have a really versatile team but in terms of the forward passes it was key for us to find the balls between the lines and behind the defenders and I think that worked tonight.”

Bell was happy to finish the campaign on a high and his team will now start preparing for the European Championship campaign with a string of friendlies, the first of which will be against Poland. In February they will find out what big names stand between them and tournament football. There were games in this campaign that suggested they are still some way off getting there but they underlined here that they have at least narrowed the gap a little over the course of the past year.

1 Reality Bites – Tales from the new normal: Caitríona Cormican
2 A beautiful, happy accident - Moneyball is the best sports movie ever
3 James McClean still failing to learn his own online history lesson
4 Matt Williams: We all need a bit of Bud Maher’s resilience right now
5 Nicholas Quinn: ‘Swimming became how I dealt with grief’
Real news has value SUBSCRIBE
Crossword Get access to over 6,000 interactive crosswords