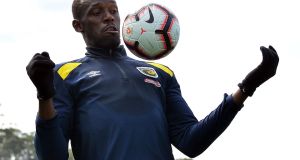 Usain Bolt may have been a dominant force on the track during his career but he has struggled to make large inroads into his dream of becoming a professional footballer.

The 32-year-old Olympic sprint champion has had trials in Europe, trained in South Africa and is set to make his debut in Australia as part of an indefinite trial for the Central Coast Mariners.

Here’s a look at Bolt’s efforts to swap his spikes for studs.

Bolt paid the South African side a visit in January and was offered the chance to train with the African Champions League champions. The sprinter said the gruelling session showed he was not fit enough to play, but coach Pitso Mosimane said “He’s a tall striker” he’s got the height“ goalkeeper” centre-back“ he can play wherever he wants.”

The Jamaican was invited to train with Bundesliga giants Borussia Dortmund for two days during an international break in March. Bolt gave his performance — which included a neat headed goal from a Mario Gotze chip — a seven out of 10, but boss Peter Stoger said: “I think he is talented, but when he wants to play at a higher level, he clearly has a lot of work to do.”

From Germany to Norway, and Bolt made a 20-minute cameo for Stromsgodset in a friendly against Norway U19 after training with the 2013 Eliteserien champions in June. Sporting the number 9.58 in recognition of his world record, Bolt was part of a side which lost 1-0 and the Jamaican failed to convert a decent chance, unable to head the ball goalwards from close range.

The second outing for Bolt wearing the 9.58 number saw him play at Old Trafford, captaining the World XI side at Soccer Aid. He had previously expressed his dream of playing for Manchester United and delivered a man-of-the-match performance in front of 71,965 fans. After a 3-3 draw in normal time, Bolt found the net in the penalty shootout but England prevailed 4-3.

Bolt is set to make his footballing debut for Australian club Central Coast Mariners in a friendly on Friday night. He’s been put through his paces for the Mariners — who finished bottom of the league last season — after being signed on an indefinite trial for the club based 50 miles north of Sydney.

Head coach Mike Mulvey has said the eight-time Olympic champion is likely to play some part at the Central Coast Stadium against a select XI in front of more than 10,000 fans. Manchester-born Mulvey said: “It comes down to what the fitness coaches tell me with regards to how his body’s coping with the loading we’ve got at the moment. But I would imagine he’s going to be playing some part on Friday.

“When you do track and field it’s virtually a straight line and a track coach will never ask you to decelerate or accelerate the way that we do, it’s multidirectional movement in football, so he has to get used to that.

“I’m quite pleased with the way he’s progressing, and he’ll be sore every night, because the sessions are quite gruelling, but he’s determined.”

The 100m and 200m world-record holder is currently having an indefinite trial with the Mariners as he bids to earn himself a sport-swapping contract for the forthcoming A-League season, which starts in October.