Wales find Croatia too hot to handle in Osijek 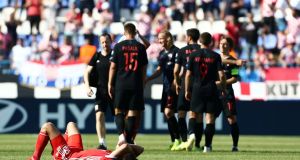 Ryan Giggs’s Wales side suffered a Euro 2020 setback as Croatia beat them 2-1 on a scorching afternoon in Osijek.

A 17th-minute James Lawrence own goal and an Ivan Perisic strike at the start of the second half sealed Wales’ fate on a day when Croatia were too hot to handle.

Substitute David Brooks gave Wales a lifeline 13 minutes from time with a deflected drive and the Bournemouth forward almost equalised in the final seconds to snatch an unlikely point.

The temperature gauge was touching 30 degrees at kick-off and the two teams took water breaks at the midway point of the first and second periods.

Croatia coach Zlatko Dalic had expressed his displeasure with the afternoon kick-off, claiming Uefa had disrespected his World Cup finalists by not staging the game in the evening.

It was, however, always Wales who were likely to be punished by the 3pm kick-off time given Croatia’s capacity to keep possession and force their opponents to expend energy chasing the ball.

Luka Modric might be a few months shy of his 34th birthday, but Wales regularly struggled to get near the Real Madrid craftsman, who dictated the tempo of the contest.

The size of Wales’ task was reflected by Croatia’s daunting home record.

The World Cup finalists had never lost a Euro qualifier at home, a 32-game run stretching back to their first match in the competition in 1994, and had not been beaten at home for six years.

Croatia were also unbeaten in 11 games in Osijek, an inhospitable venue where Wales had previously succumbed in 2010 and 2013.

Wales made one change from the side which got their Euro 2020 campaign off to a winning start in March.

Rotherham midfielder Will Vaulks came in for his first competitive start as Manchester United-bound winger Daniel James, who had scored the winner against Slovakia, provided pace in the Wales attack alongside Gareth Bale.

Croatia dominated the early exchanges with their slick passing and Chris Mepham had to react quickly to snuff out Andrej Kramaric.

Bale sent a quick long throw over the head of Dejan Lovren and on to the left foot of Harry Wilson.

The ball sat up nicely for Wilson to volley but the effort lacked power and was easily collected by Croatia goalkeeper Dominik Livakovic.

It was to prove a costly miss as Modric soon picked out Perisic with a delightful pass, which Wales goalkeeper Wayne Hennessey chose not to come for and retreat instead towards his goal.

Perisic’s pass was aimed for the lurking Kramaric, but Lawrence intervened to roll the ball into his own net.

Wales had been almost non-existent as an attacking force in the first half, but they managed to involve James just before the break.

James sent over a deep cross which Wilson placed into the path of Vaulks to drive at goal. Livakovic failed to hold Vaulks’s effort and then clawed on as Ben Davies almost bundled in the rebound.

Croatia made a fast start to the second half and doubled their lead after 48 minutes.

The Wales defence was all over the place after possession was conceded just outside their penalty area and Perisic swept home after Connor Roberts had failed to clear at the far post.

Croatia had been denied a second moments earlier when Hennessey saved from Brekalo and Kovacic’s follow-up effort was ruled out for offside.

Bale brought two saves from Livakovic as Wales gambled by pushing men forward and Brooks gave them hope 13 minutes from time with his first international goal.

That set up a thrilling conclusion with chances at both ends, but Croatia held on to take top spot in Group E.

1 Henshaw the only change as Andy Farrell names Ireland team for Paris
2 Gordon D'Arcy: Ireland must go after victory by frightening France into mistakes
3 Warren Gatland: England players could miss Lions tour if not released for Japan warm-up
4 Women’s GPA says demands on female GAA players are ‘increasingly unsustainable’
5 Cian Healy: ‘Realistically I got away with murder when I was younger’
Real news has value SUBSCRIBE
Crossword Get access to over 6,000 interactive crosswords