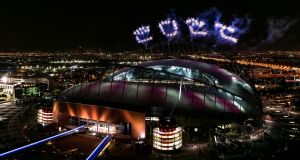 Fireworks over Khalifa International Stadium during its official opening ceremony in May. It’s the the first completed 2022 Fifa World Cup venue, five years before the tournament begins. Photograph: Qatar/Getty

The prospects of the 2018 and 2022 World Cups being hosted by Russia and Qatar have been strengthened after Fifa dramatically published in full the investigation by the US prosecutor Michael Garcia into the 2010 voting process.

Long thought to contain explosive revelations after Garcia resigned in 2014 protesting that a summary published by his fellow ethics committee chairman, Hans-Joachim Eckert, misrepresented it, in fact his 349-page main report contained some startling detail on the “culture of entitlement” at Fifa, but his main findings largely tallied with the thrust of Eckert’s summary.

He did find evidence of serious alleged irregularities, and recommended investigation and action against several senior members of Fifa’s executive committee, including the former German player and coach Franz Beckenbauer. But he did not recommend that the vote be annulled.

Qatar were found to have employed tactics familiar now including the sponsorship of the Confederation of African Football conference in Angola, and the famous 2010 lunch attended by the son of the country’s then emir with President Nicolas Sarkozy of France and the then Uefa president Michel Platini, but not to have bought votes.

Russia’s bid to host the 2018 World Cup was found not to have fully reported all its contacts with the executive committee members, as required by the rules, but were otherwise explicitly cleared of offering any excessive gifts or “undue influence”.

The publication of the report will prompt some embarrassment within the English FA whose chairman in 2014, Greg Dyke, protested that the Eckert summary was a whitewash.

Garcia included much more detail on the finding revealed by Eckert that England’s 2018 bid had found work, at Tottenham Hotspur and at Wembley, at Warner’s request, for a young man he described as “like his adopted son”. The FA has never commented officially on the criticisms made of its conduct by Eckert.

The most striking difference between the summary Eckert published in November 2014 and the full Garcia report was in Garcia’s criticisms of Fifa’s then president Sepp Blatter, which were absent from Eckert’s summary.

Garcia found no case to answer that Blatter had breached any of Fifa’s ethics codes over the fraught and suspicion-laden process which led to Russia and Qatar claiming the next two World Cup finals tournaments.

However, Garcia said explicitly that holding a vote of Fifa’s then executive committee at the same time for two different bids was vulnerable to collusion.

He also found that Blatter was much more indulgent and generous towards the executive committee members than the disapproving statements of wrongdoing he made in public – even suggesting in November 2010 that they should each be paid a bonus of $200,000, including two members, Amos Adamu and Reynald Temarii, who were suspended at the time.

After praising Blatter for introducing reforms, Garcia wrote: “As head of Fifa, however, President Blatter bears some responsibility for a flawed process that engendered deep public scepticism, and for presiding over an executive committee whose culture of entitlement contributed to many of the issues this report identified.”

Garcia concluded: “As the leader of Fifa, responsibility for these failings and for positive steps taken to reform the organisation resides with president Blatter.”

Gianni Infantino was elected to succeed Blatter as president in February 2016, and in a statement Fifa said the new chairs of the ethics committee had decided to publish the Garcia report, as Infantino had called for, because the German magazine Bild had a leaked copy it was planning to reveal in stages.

Infantino, who has said the World Cups in Russia and Qatar will go ahead, is unlikely to find the tournaments too troubled by the long-awaited publication.

The bid mounted by the tiny Gulf state of Qatar to project itself globally by hosting the World Cup was lavish, promoted by the ruling emir and his then son, and used the facilities of the country’s Aspire academy, but Garcia did not conclude that Fifa votes were bought.

He accepted the position of the official Qatar 2022 bid, which it has repeatedly stated in public, that the disgraced Qatari football official Mohamed bin Hammam, who did make corrupt payments, was not connected to the bid itself.

Garcia also concluded that a series of payments Bin Hammam made to officials of African football federations were not related to the Qatar 2022 bid, but more likely to his own bid to oppose Blatter in Fifa’s 2011 presidential election.

The 2018 bid by Russia, which Roman Abramovich personally supported, was explicitly cleared of wrongdoing in the report produced by Garcia’s deputy, Borbély. As Eckert had stated in his summary, Borbély accepted in his report that Russia’s official bid “leased” its computers, then returned them to their owner, who destroyed them.

The release of Borbély’s report has revealed that the owner was the Konoplyov football academy, a “football foundation [which] appeared to have been linked with Mr Roman Abramovich”. The Chelsea owner, who became a billionaire when he bought Russian state assets cheaply in corrupt auctions in the early 2000s, travelled with the 2018 delegation but was found not to have provided any financial help to the bid apart from the computers.

The revelations about Beckenbauer largely relate to the employment by the Australia 2022 bid team of his long term business associate and advisor, Fedor Radmann, with another Munich-based consultant, Andreas Abold.

Garcia recommended that Beckenbauer, who was disciplined for failing co-operate, should be investigated further for evidence he “violated substantive ethics provisions”. Guardian Service