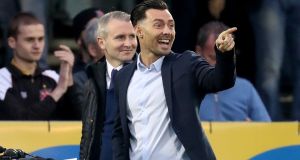 Richie Towell was at Oriel Park to see his former side win 4-0 against Finn Harps. Photograph: Bryan Keane/Inpho

Lady Luck turned her back on Ollie Horgan’s Finn Harps at Oriel Park as Dundalk ran out convincing winners in the end.

The teams went in scoreless at the break with the champions left frustrated by a well drilled Harps performance, but once Robbie Benson made the breakthrough with an effort he knew very little about, Dundalk cut loose.

David McMillan missed a gilt-edged chance in first-half stoppage time to put the hosts in front while Ciaran Gallagher also made a number of fine saves.

The visitors also had their moments with Sean Houston seeing a drilled shot tipped around the post by Gary Rogers.

Benson’s opener proved to be a real moment of good fortune for Stephen Kenny’s side. Dane Massey let fly with a blistering half-volley with the outside of his boot that Gallagher did brilliantly to push away.

Unfortunately for the Harps netminder, the ball cannoned off the face of the Dundalk midfielder and flew into the net.

McMillan pounced on a loose ball to take the ball around Gallagher and steer home from a tight angle four minutes later and goal number three arrived in the 63rd minute, Patrick McEleney drawing rapturous applause with another Goal of the Month contender.

Substitute Jamie McGrath put the icing on the cake with a tidy finish with 10 minutes to go to seal the win.

The win moves the Gypsies, unbeaten now in four games, up into the top half of the table as Sligo hover above the relegation zone without a win in seven.

Keith Long’s Dubliners’ ended a scrappy start to the game to avail of a shocking howler to take a ninth minute lead. Midfielder Ward was made retake a free kick after he played it short too quickly for Longford referee Ray Matthews.

And at the second time of asking Ward had a go with his dipping shot looking comfortable for Micheal Schlingermann to gather. But somehow the Sligo keeper fumbled the ball which ended up in his net.

Bohemians’ keeper Shane Supple produced a terrific save from Sligo substitute Liam Martin on 77 minutes, before the home side doubled their lead on 82 minutes.

Bray Wanderers were on a terrible run before victory over Derry City last time out and Anto Flood’s opening goal set up another win at Eamonn Deacy Park which means they are right back in the race for second place.

Last Friday’s 3-2 success was Bray’s first league win in six games and was another huge step in the right direction.

Bray held a 2-0 lead at half-time and they were comfortable with strikes from Anto Flood and Mark Salmon giving them the ascendency.

He latched onto a cross from Keith Buckley to push his side 2-0 up and they held that lead until the interval. Galway had their chances at the start of the second-half and Stephen Folan headed a goal in the 78th minute but it was too late.