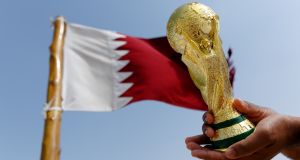 The report claims that the Qataris flew three members of Fifa’s executive committee to a party in Rio on a private jet. Photo: Getty Images

Qatar’s successful bid for the 2022 World Cup looks set to become mired in fresh controversy after the leaking of a secret Fifa report into the 2010 bidding contests.

That highly controversial process saw Russia beat several European bids, including England’s, to win the right to host the 2018 World Cup and the tiny but wealthy Gulf state overcome the likes of the United States for 2022.

After repeated claims about corruption in the run-up to those votes, Fifa asked its then-chief ethics investigator Michael Garcia to compile a report into the bidding nations for both World Cup, which he produced in 2014.

His 430-page investigation has never been published before — Fifa, instead, put out a 42-page summary which Garcia promptly disowned — but now German newspaper Bild has obtained a copy of the original.

It is understood that its contents will be published in two parts on Tuesday and Wednesday but the lead journalist Peter Rossberg began releasing extracts via social media on Monday night — the early indications are that his scoop will heap more suspicion on Qatar’s bid, in particular.

Among the early revelations from the Garcia report are claims that the Qataris flew three members of Fifa’s executive committee to a party in Rio on a private jet shortly before the December 2010 vote on the 2018/2022 hosts, the Qatari bid used access to its state-of-the-art Aspire sports academy to influence voters and €1.8million was sent to a bank account belonging to the 10-year-old daughter of another ExCo voter.

That last allegation was first made by the Daily Telegraph in 2014 and there is a sense from what has emerged so far that much of this has been heard before — Rossberg himself wrote on Facebook that there are “no surprises” for anybody who has followed this story closely. In fact, he goes on to write that “the report does not provide proof that World Cup 2018 or 2022 has been bought”.

But he then accurately describes the Garcia report as another piece in the puzzle and suggests that only when all those pieces are put together will the complete picture be obvious.

In a section on how the Qatari bid used Aspire, which had satellite operations in five countries with Fifa voters, to “curry favour with executive committee members”, Garcia wrote “those actions served to undermine the integrity of the bidding process”.

But Eckert translated this as “potentially problematic facts and circumstances” which “were, all in all, not suited to compromise the integrity of the Fifa World Cup 2018/2022 bidding process as a whole”.

It is little wonder that an indignant Garcia returned to the US accusing Eckert of making “numerous materially incomplete and erroneous representations”.

Whether the appearance of his complete work will correct any of those representations enough to threaten Qatar’s staging of the World Cup is debatable, as the once-incredible project has withstood everything that has been thrown at it so far and there appears to be little appetite at Fifa to revisit its most contentious decision.

That does not mean, however, Qatar 2022 is out of the woods, though, as criminal investigations into the bid, some fuelled by Garcia’s early work, continue in France, Switzerland and elsewhere, while the country’s diplomatic row with its Gulf neighbours will raise serious questions about its suitability to stage a major global event if it is not resolved in the coming months.

1 ‘Manchester United are lucky to have you’: Klopp responds to Donegal schoolboy’s letter
2 Six Nations: Ireland v England all you need to know guide
3 United greats in attendance as club hero Gregg laid to rest
4 Iain Henderson ruled out of Ireland’s Twickenham visit
5 Liam Toland: Larmour can distract England while others flourish
Real news has value SUBSCRIBE
Crossword Get access to over 6,000 interactive crosswords