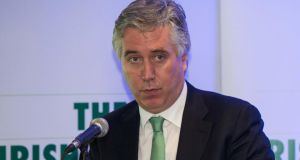 FAI chief John Delaney: “Blatter has had a hell of a run at it. But surely he knows . . . that outside of the voting chambers that the world, the football public, the players and supporters want change.” Photograph: Cathal Noonan/Inpho

In an interview with the BBC which promoted a certain amount of mirth on social media yesterday, Delaney suggested that Blatter had been in office long enough, is guilty of overstating his achievements and is generally regarded by those outside of his immediate sphere of influence as having stayed too long in the job.

“Regardless of the good he claims to have done during his tenure,” Delaney said, “he has to recognise that Fifa has an incredibly bad brand image. If he was doing the right thing by football, which he says he cares and loves, then he should step aside and let somebody else come forward and improve the image of the world game.

Delaney went on to pay tribute to Michel Platini and the European federation, saying that Uefa, which provides substantial and critically important funding to the financially challenged FAI, had shown its openness to new ideas by implementing what he described as his idea to expand the European Championships and by adopting the Frenchman’s proposal to spread Euro 2020 across 13 host nations.

“I have no problems telling anybody, telling the world now, that we will not be voting for Sepp Blatter. There is a permanent controversy at Fifa.”

The decision to abandon Blatter, who the association has previously supported and who remains favourite to win, was formally taken at a meeting of the FAI’s board where Platini’s firm opposition to the Swiss is believed to have been a significant factor.

Earlier this week, Platini, who had been widely expected to run himself until Blatter reneged on a commitment made in 2011 that he would stand down after his fourth term if he secured it, said his rival was attempting to stay on because of a “fear of emptiness” that was the result of having been at the top of Fifa for so long.

He said he should nevertheless put the interests of Fifa before his own and step aside. Platini went on to firmly endorse Blatter’s rival. “I am firmly convinced that Ali . . . would make a great Fifa president. He has everything it takes.”