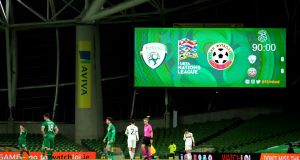 The Aviva Stadium has played host to 18 behind closed doors games to date during the coronavirus pandemic. Photograph: James Crombie/Inpho

FAI chief executive Jonathan Hill believes Uefa still intends to proceed with staging the European Championships across 12 cities, including Dublin, this summer but feels that the tournament will go ahead behind closed doors if there are ongoing doubts about allowing spectators in to watch the games.

“March 5th is what Uefa are talking to all of the 12 cities about at the moment [in terms of a final decision being announced] but to be absolutely clear they are committed to each of those 12 cities and to that concept,” Hill told an industry conference organised by Sport for Business.

“But look, it would be foolish to say that there are no challenges in relation to a concept that was created a number of years ago, pre-pandemic and we here in Ireland will always follow Government advice and the directives here from Nphet.”

Bayern Munich chief executive Karl-Heinz Rummenigge suggested on Thursday that Uefa president Aleksander Ceferin is actively considering a switch to staging the tournament in just one country because of those challenges. But reacting to the German’s comments, the federation said that it was looking at four potential scenarios with the various associations due to host games, with full stadiums at one end of the spectrum and empty ones at the other.

“We will need to work hard to make sure that we can deliver, fingers crossed, the maximum number of attendees into the stadium itself,” said Hill before acknowledging that “they want to get the tournament away, though, even if it has to happen behind closed doors.

“I don’t think that will be the case but that’s obviously, from a commercial perspective, extremely important in relation to the broadcast side of things.”

Speaking at the same event, Aviva stadium manager Martin Murphy said that all of the stakeholders are in constant contact about when it might be safe to allow spectators into games, but that having staged 18 behind closed doors in recent months, he is confident that all the necessary precautions can be taken when the conditions allow. The venue, he said, would require just two weeks notice to cater for substantial crowds again.

Hill, meanwhile, suggested that he is pleased with the progress that the FAI is making on the governance and commercial fronts since he took over as chief executive.

Much running on the former was made by Gary Owens and Hill, who is still based in London, said that “we have a very clear pathway now in relation to addressing some of the historical governance issues that the organisation clearly had. We’re working with Sport Ireland to make sure that we do that in the right way; a sustainable way.”

In terms of commercial revenues, he said that persuading SSE Airtricity to come back in as sponsors of the League of Ireland and, now, the Women’s National League, was a step in the right direction but he acknowledged that the current environment is a tough one in which to be generating new money.

“I think the announcement yesterday was a very was a very positive one for the organisation. Last year, there were moments in which they felt that maybe football and the League of Ireland wasn’t the right platform for them but we had good, honest, open and transparent conversations and we found the way forward.

“That’s a good starting point in relation to us driving the commercial agenda. We look forward to developing those conversations within the sponsorship and business community but to do that we have to make sure that the basics are right, and I’m looking very closely at that in relation to our overall positioning; as both a sporting association and also as a business.

“We need to be financially stable as an organisation moving forward so the commercial agenda is incredibly important for me. I come from a commercial background and though we are in a very competitive space in relation to sponsorship, there are very many opportunities out there and they present themselves in very distant different forms. We need to make sure that we are very flexible and willing to listen.

“And, frankly, there’s actually no better time to be talking about our national teams and certainly the senior men’s team, than in a World Cup qualification year. We will have a focus on that in making sure that both Stephen [Kenny], and Vera [Pauw], and the other teams, are as well prepared as they can be when they come to play competitive matches.”