England ease past Cameroon into quarter-finals amid latest VAR farce 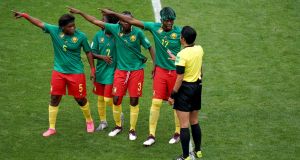 At times it was as chaotic as the traffic in downtown Yaoundé at rush hour but, when the dust finally settled, England’s “Benevolent Leader” had outsmarted the coach dubbed “Mean Dog” and England were in the last eight.

As befits his nickname, Alain Djeumfa had choreographed a highly committed, if sporadically kamikaze, and sometimes unintentionally comedic, performance from his so called Indomitable Lionesses. Phil Neville’s plain old Lionesses England were left with the bruises to prove it but much more depressing was the childishness of some of the Cameroon players and particularly their apparent, thoroughly risible, claims that Fifa were racist when VAR rightly overruled a refereeing decision and awarded Ellen White’s clearly onside second England goal.

The French may have fallen for Neville, or the “guide Bienveillant” as they call him but there was precious little courtesy or emotional intelligence – his much admired traits – out on the pitch. Indeed there were spells when it all descended into rank farce. It was desperately unprofessional – not to mention disgraceful – on Cameroon’s part and horribly detrimental to the women’s game as a whole. France 2019 could desperately have done without a round of 16 encounter like this.

Long before the end the referee had lost control of the game and seemed terrified the Africans would walk off the pitch; Neville’s side did not always look convincing but hats off to England for retaining commendable discipline and composure in the face of some appalling provocation, cynical fouling and play-acting. After this the quarter-final against Norway in Le Havre on Thursday night is in danger of seeming rather boring.

It should have become 11 v 10 in the fourth minute when Cameroon’s Yvonne Leuko elbowed Nikita Parris in the face as she skipped past her. Instead of sending the defender off though Qin Liang, the Chinese referee, merely brandished a yellow as Leuko adapted her best “butter wouldn’t melt” expression. Goodness knows why the incident was not referred to VAR, which seems to have developed a habit of becoming involved when it is not needed but ignoring important incidents.

No matter; 10 minutes later England were ahead. When Augustine Ejangue was judged to have passed the ball back to her goalkeeper, Annette Ngo Ndom, England won an indirect free-kick on the edge of the six-yard box. Cameroon responded by lining all 11 players up on the goal line but, as Toni Duggan tapped the ball to Steph Houghton, England’s captain delighted in reminding everyone why she used to be a centre forward by directing her six-yard shot low into an unguarded few inches near the bottom corner.

Executed just as those 11 opponents charged towards Houghton, that dead ball took a while to be taken, with one of the reasons for the delay being Duggan’s complaint that Ejangue had spat at her. Replays proved this to be the case but Ejangue, who argued unconvincingly it was accidental, escaped sanction.

When Neville was asked for a single word to sum up his side on the eve of kick-off, England’s coach could not think of one, but here they were dominant. Jill Scott, overtaking Peter Shilton to become England’s most capped player at World Cups. This was the midfielder’s 18th appearance at a showpiece tournament and Scott revelled in driving her team forward, often linking intelligently with the influential Lucy Bronze/Nikita Parris right-sided axis.

Bronze’s neatly threaded pass created England’s second goal for White – although celebrations were delayed until the aftermath of a welcome VAR intervention. White’s crisp first-time finish looked a clear goal, as even though Parris was in an offside position, she was patently not interfering with play. Liang though initially disallowed it before a VAR review saw it given.

Cameroon reacted very badly, at one point gathering in the centre circle and refusing to play on. Indeed for a while it seemed they were all going to sit down in the middle of the pitch and refuse to budge.

At one point Houghton looked set to intervene before told, in no uncertain terms, to stay out of it by an animated Neville. Half-time came quickly and featured reports of African players crying in the tunnel and apparently protesting that Fifa was racist.

Their collective mood briefly seemed to improve when, early in the second half, an awful English defensive mix up permitted Ajara Nchout to connect, first time, with a cross and shoot beyond Karen Bardsley. This time the referee awarded the goal only for it to be disallowed following the VAR review. It appeared a correct but very marginal decision which left Ajara in tears. Yet again she and her team-mates briefly threatened to stop playing, delaying the restart and leaving Djeumfa apparently at a loss to know what to do. At one point Neville felt moved to come across and console the manager, who was only promoted from his former role as fitness coach in January.

England’s first meeting with an African side since Nigeria back in 1995 was certainly proving eventful but Alex Greenwood made absolutely certain of the win, lashing the ball powerfully into the net after meeting Duggan’s low well-worked corner.

England probably should have had a penalty when Fran Kirby was felled by Ysis Sonkeng when playing Jodie Taylor in but, perhaps diplomatically, Liang decided against awarding it as who knows how Cameroon might have reacted. It was that sort of afternoon.

Typically the game ended with Alexandra Takounda stamped on Houghton’s ankle. It was a shocking challenge and a clear red card but a yellow was shown as the match ended in acrimony. – Guardian

1 What next for green jersey hero Sam Bennett after toughest of Tours?
2 LeBron James has become this generation’s Muhammad Ali
3 Suarez’ Italian language exam rigged according to prosecutors
4 Gerry Thornley: Talk of Anglo-French hegemony is over the top
5 Why this weekend’s Champions Cup semi-finals are still worth watching
Real news has value SUBSCRIBE
Crossword Get access to over 6,000 interactive crosswords