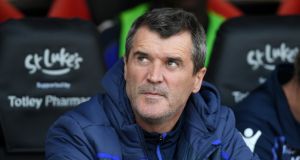 Roy Keane has left his role as assistant manager of Nottingham Forest, the club have confirmed.

Keane arrived at The City Ground in January as Martin O’Neill’s number two, after the duo had left their management roles with the Republic of Ireland in November 2018.

The 47-year-old played for Forest for three years after joining from Cobh Ramblers in 1990, before becoming a British record signing when making the switch to Manchester United in 1993.

A statement from Forest read: “Roy would like to express his gratitude to the club’s owner, board of directors, the staff, the players and in particular manager Martin O’Neill for the opportunity to return to The City Ground.

“The former Red would also like to place on record his appreciation to the supporters who have welcomed him back so warmly since his appointment in January.

“Everyone at the club would like to wish Roy the very best in the next stage of his career.”

On his departure, Keane said: “Working with Martin over the last few years has been a magnificent experience, one of my greatest in football both as a player and a coach and one I want to personally thank him for.”