David De Gea’s heroics not enough to save Spain 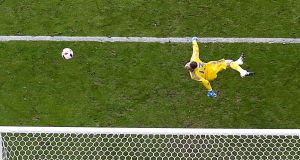 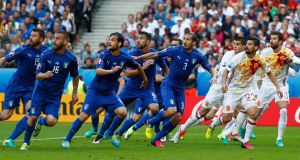 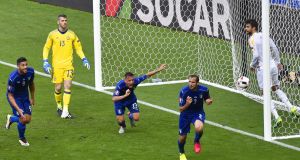 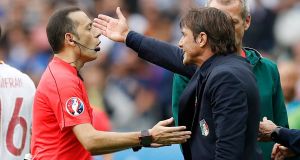 Perhaps this game did not live up to its billing, perhaps it never could, but the result was a big one. Spain are far from invincible any longer and are on their way home. Whether that counts as a shock depends on how stern a view one takes of the Spanish fall from grace in Brazil two years ago, though what is indisputable is that Italy were superior in almost every department with the possible exception of finishing.

If Antonio Conte had a goalmouth predator at his disposal in the great Italian tradition the scoreline might have been even more emphatic. As it was Italy were hanging on at the end until Graziano Pellè’s breakaway goal in stoppage time, a position they should never have been in considering their overall superiority.

It might have been the effect of a downpour straight after kick-off that soaked the players and sent spectators in the Saint-Denis seats scuttling for cover on the stairways, but Spain were slow to get into their stride. Italy made the first couple of openings, with David de Gea twice busy in the opening 10 minutes, first getting down low to his left to keep out a Pellè header from a free-kick then reacting well to push Emanuele Giaccherini’s overhead effort onto a post. Italy seemed sharper, even if the slippery conditions made precise passing difficult, and though Andrés Iniesta was doing his best to launch attacks he was doing so from positions a long way from goal.

Italy’s main strength is defence, Robbie Brady’s header against them in Lille when they had already topped their group was the only goal they conceded in their first three matches, and when David Silva and Nolito finally managed to present Cesc Fàbregas with a shooting opportunity midway through the first half Mattia De Sciglio was swiftly out of the defensive line to block.

The left wing-back De Sciglio was quite an influential figure in the first half, even if he did pick up yet another Italian caution, for a shirt pull. He provided the cross from which Marco Parolo headed wide as Italy came forward again, and also the teasing ball across the face of goal which Sergio Ramos could only divert at the expense of a corner, almost putting through his own goal in his determination to prevent it reaching Pellè at the far post.

Italy really needed something to show for their pressure, Spain were quite comfortable as long as the game remained scoreless, and just after the half-hour mark they gained their reward for an encouraging start. Gerard Piqué fouled Pellè on the edge of the area, De Gea could not hold Éder’s powerful free-kick, and of the two Italians who were quicker than the Spanish defence to the rebound Giorgio Chiellini got there after Giaccherini but provided the crucial last touch. De Gea did well to keep out the initial shot but will blame himself for not making a clean save, or at least for not getting a firm enough hand to the ball to push it away to safety.

The Italians coolly protected their lead until the interval and were quite good value for it. With a little more pace Éder and Alessandro Florenzi’s runs down the left might have done more damage than merely making Ramos feel his age, and right at the end of the half it took a flying fingertip save from De Gea to prevent Giaccherini’s effort curling into his top corner.

Gianluigi Buffon, in contrast, had been underemployed in the first period. While his defensive screen could not be faulted for doing its job well, in terms of asking searching questions Spain were a disappointment going forwards. Neither Silva nor Iniesta were proving able to bring Nolito or Álvaro Morata into the game.

Nolito did not reappear for the second half, Aritz Aduriz coming out instead, and though the Italians seems to have grown in stature and confidence during the interval Spain did at least open their attacking account when Morata’s header from a Fàbregas cross forced Buffon to make his first save. That was a routine stop, however, the header was straight at the Italian goalkeeper, whereas De Gea had to come to his side’s rescue again when Pellè slipped Éder clear through on goal. De Gea stood his ground as he has done so often for Manchester United and blocked the shot with his body, though in truth Éder should probably have done better with the whole of the goal to aim at.

Éder and Giaccherini between them missed a couple more opportunities to make the game safe, and Italy consequently had to sweat as Aduriz and Ramos went close for Spain. The tension in the closing minutes was amply demonstrated when Conte booted the ball down the touchline in frustration, possibly risking a caution for timewasting, and by the end Italy were living dangerously with Buffon having to deal with shots from Iniesta and Piqué.

To redress that balance substitute Lorenzo Insigne whisked past Ramos and brought another save from De Gea, before Buffon had to make another stop from Piqué in the closing seconds of normal time. Italy were worth the win even before Pellè’s stoppage-time volley from Matteo Darmian’s cross made progress certain, though they will not be installed as favourites for this tournament without sharpening their goal instincts. Guardian Service