Chloe Mustaki is ready to pick herself up again

Facing a year out with injury, the Charlton defender is used to making up for lost time 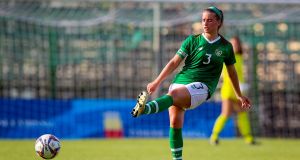 Chloe Mustaki: “I’m young, this is a time in my life when I need to be pushing myself out of my comfort zone, I feel like there’s no time to be wasting.” Photograph: Tommy Dickson/Inpho

You know what they say, if you didn’t laugh you’d cry.

So, when Chloe Mustaki met up with Republic of Ireland manager Vera Pauw and her assistant Eileen Gleeson last Thursday evening the trio had, she says, “a good giggle”, her misfortune so preposterous all they could do was laugh in the face of it, in a “Jesus Chloe, what next?” kind of way.

“And honestly, you can’t do anything else but laugh,” she says. “Just when my football career was starting to kick off, this happens. That’s just life, what can I do?”

It was an innocuous challenge for the ball with a team-mate near the end of Ireland’s final training session on the Wednesday before last week’s Euro 2021 qualifying game against Greece.

“I just went in for a tackle with Heather Payne, we were both going for the ball, she got there a split second before me. She kicked it and the follow through of her foot pushed my leg in one direction, the opposite to the one I was coming in. So my body was going in one way, my leg the other. They showed me back the video of it and I’m mid air, holding my knee. I knew the second it happened that was me for months. I wasn’t screaming, but I was rocking with pain. It was intense until the meds kicked in.”

The scan confirmed her worst fears. She had ruptured her anterior cruciate ligament, an injury that leaves her facing up to a year out of the game.

“It was at that point I started crying. I just felt utterly crap. I’ve had injuries before, but nothing on this scale at all. But I guess due to my history, putting things in perspective isn’t so difficult for me. Once the news had sunk in it was, ‘right Chloe, pick yourself back up’.”

And that history means she’s no stranger to having to pick herself up. It was after she had captained the Irish under-19 team to the semi-finals of the 2014 European Championships that she was diagnosed with Hodgkin’s lymphoma, the road to recovery a harrowing one. But she battled through it, got herself well again, and since then, she says, it’s been all about “making up for lost time”.

My ambition since I finished up with the 19s was to get back into the international set-up, it was something I was working towards almost since my diagnosis. I was just so happy. I had waited so long for the chance.”

In that spell, she’s done her Erasmus college year in Bordeaux, where she played for FC Girondins de Bordeaux during her stay; she’s represented Ireland at the 2017 World University Games in Taipei; she’s graduated from UCD with a degree in Commerce and French; she’s done her Masters in Lisbon; she’s interned with PriceWaterhouseCooper, she’s moved from DLR Waves (formerly UCD) to Shelbourne; she’s moved to London where she’s started working for Maven Search, an “executive search and advisory firm”, and she’s joined Charlton Athletic. And that’s just the gist of it.

Chloe? You’ve made up for lost time. “Ha, I’ve tried,” she laughs. “I’ve been really privileged to have had all those experiences, I’ve had a whirlwind of a time the last five years. I’m young, this is a time in my life when I need to be pushing myself out of my comfort zone, I feel like there’s no time to be wasting.”

The single best day came last September when Mustaki was called up to the senior Ireland squad for the first time. “I still remember where I was in the office in London when I got the confirmation email. Honestly, I skipped out of work that day. My ambition since I finished up with the 19s was to get back into the international set-up, it was something I was working towards almost since my diagnosis. I was just so happy. I had waited so long for the chance.”

The past six months have been insane in terms of my schedule, so I suppose this is one way of slowing me down”

And since Pauw called her up, for what was the Dutch woman’s first game in charge, Mustaki has held her place in the squad. She is still to win her first cap, though, one that might well have come against the Greeks last week when the Ireland squad was struck by a bunch of injuries. Mustaki’s versatility – she plays in defence and midfield – meant she had every chance of being involved.

But now, instead of heading to Montenegro with Ireland for yesterday’s qualifying game, the 24-year-old is back home preparing for an operation on her injury in the coming weeks. “I’m on crutches, I can’t walk at all, the knee is still quite swollen,” she says, “but work have been really kind and understanding, they’re allowing me work from Dublin while I wait for the surgery.”

It’s not easy finding an upside to her situation, but she’s trying. “The past six months have been insane in terms of my schedule, so I suppose this is one way of slowing me down,” she laughs. “We train Tuesdays, Wednesdays and Thursdays at Charlton. I’m up at 7am, I get home from training at 11.15 at night and I’m in bed around midnight. And that’s three days in a row with three hours on public transport, squashed in, eating my dinner on the way to training. It’s been tough, it’s a mental battle every day because you’re so tired, you really have to push yourself, but it’s been worth it – especially when I was called up to the Irish squad.”

“The fact that this happened, maybe something had to give after a while, I don’t know. The injury itself wasn’t down to overplaying or being tired or anything, it was just pure unlucky. But there probably wasn’t much longer that I could keep doing what I was doing.”

Her contract with Charlton, who she joined last November, is up at the end of the season, so she doesn’t know yet how things will work out. But she’s determined to come back stronger than ever, and, more than anything, to win that first Irish cap.

“And I won’t stop until I prove myself. Hopefully in a year’s time I’ll be back in the mix. It’s such a crap injury, Rianna Jarrett’s been through it three times, but so many have come through it. Some people I’ve spoken to said forced time out of sport allowed them improve their physical condition and they came back for the better afterwards, you have time you didn’t have before to work on things. So maybe this is an opportunity for me to put in that work and be a better player when I come back. I just have to make sure I have the right mentality and discipline.”

“I’ve received so much support in the last few days, a lot of people have said that I’ve been through worse, so there’s no reason I can’t get through this. And they’re right. If I hadn’t been through what I went through five years ago my mentality would be completely different right now. I’m not looking at it like it’s the end of the world. This injury isn’t life-threatening. I’ve been in a situation where my life has been at risk. In that sense I’m able to put a perspective on things. So yeah, I’ll keep my head up. I’ll get through it.”