James McClean: ‘As long as the manager picks me that’s all that matters’ 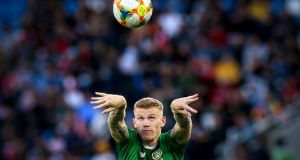 James McClean: “The last time we played Denmark to qualify it didn’t go so well. But look, it’s another shot. Nothing is going to right the wrongs of that night but hopefully it goes better than last time.” Photograph: Tommy Dickson/Inpho

The queue to start on the left hand side of Ireland’s front line may have gotten longer after Seán Maguire and Callum Robinson both impressed there against New Zealand on Thursday night but there’s little question of who remains at its head in Mick McCarthy’s mind.

The manager lamented the fact that he has so many players who seem to thrive in the position in the wake of the friendly win but did nothing to dampen the expectation that he will keep faith with James McClean there on Monday against Denmark.

The 30-year-old continues to attract criticism for his inconsistency although McCarthy has repeatedly pointed to the energy he brings to the Ireland team down that left flank. It is an assertion that is hard to argue with although his performances are probably remembered a little too often for the commitment rather than the composure he shows, on or off the ball.

McClean insisted this week that he couldn’t “give a shit” about what the media says about him although it turned out that he had, in a different room only minutes earlier, made it very clear in pretty personal terms that he would not be talking to the reporter covering the Irish camp for a web-based organisation that that had picked apart at least one of his recent international performances and come to the definite conclusion that he should no longer be Ireland’s first choice.

“As long as the manager picks me, that’s all that matters,” he says although given the extent to which he clearly engages online it is hard to imagine he actually believes it when he claims: “I’m my own biggest critic”.

But McClean stands up for himself and what he believes in. And he is endlessly willing, it seems, to live with the consequences.

This being November, he faced the usual round of questions from the media this week regarding his ongoing refusal to wear a poppy and came across as being as quietly comfortable with his position as ever.

“It doesn’t bother me,” says the Derryman whose annual refusal to play ball with what has in many instances at this stage appeared to evolve into some sort of pantomime or parody of respect invariably attracts vitriol.

“It is their country. I am not there to change their views. I respect everybody’s right to wear what they wear. But that is where the hypocrisy comes in because, as much as I agree that they can wear whatever they want, they don’t agree that nobody can tell me what to wear. So there is the backlash.

“But look . . . it’s their country, it’s their views, I have no issue with that. I never did. I can sleep better at night knowing that I can stand up for what I believe in and take whatever comes my way. I am fine, it is more my family; my wife and especially my mother. They have to deal with it just as much as I do but for me it is water off a duck’s back.”

That last bit might suggest a sort of “turn the other cheek,” outlook but, in truth, that never really seems to have been McClean’s style. He is, he says, off social media at the moment, something that both his family and football managers may well be pleased about for he has shown an incredible appetite for taking on the trolls online, sometimes responding to absolutely dreadful abuse.

He seems pleased that the English FA have privately expressed support, or respect at least, for his right to abide by his own conscience and abstain from wearing a poppy while the PFA’s public stand in favour of every player getting to make their own choice on the matter, has certainly been influenced by the firm position he has taken.

He knows, he says, of quite a few other players who would prefer not to participate but still feel it is much easier to go with the flow. It is as hard to blame them as it is not to admire the fact that he has always had the courage of his convictions, whatever your actual take on those views.

If he does have one thing in common with those determined that nobody should be allowed a personal choice when it comes to public displays of remembrance, however, it is a belief that the past is worth getting worked up about.

That much was obvious this week with his media appearance also marked by a refusal to answer questions from reporters from two different newspapers; one because his comments about the referee in the game against Austria in June 2017 had been raised by them with Uefa, the other because of the way talk of an autobiography was treated in a mocking back page five years ago. Lest we forget, eh.

That said, he shares the reluctance of other squad members to dwell on the 5-1 home defeat by the Danes that still haunts many of those who were there to witness it, insisting instead that this is a different game and so a new opportunity.

“The last time we played Denmark to qualify it didn’t go so well,” he acknowledges, “but look, it’s another shot. Nothing is going to right the wrongs of that night but hopefully it goes better than last time and come the final whistle on Monday night we’re celebrating another major tournament.”

However much he might be put out by the way in which others have dissected his own recent performances and concluded they have not been good enough, he admits he himself would have hoped for better, especially in terms of goals scored and expresses the hope that he might just manage to make a critical difference on Monday.

“Look,” he says, “I haven’t scored since the Wales game [the 1-0 World Cup qualifier win in Cardiff two years ago]). That was a good campaign but of course, not just me, if anyone else can pop up and have a big moment on Monday that would be great. But I feel I’m due a goal; I haven’t scored since Wales and it would be really nice but I have to be playing first.”

McCarthy, it was confirmed yesterday, will be without Derrick Williams for the game after the Blackburn defender who came off after scoring against New Zealand, returned to his club with a calf strain. Lee O’Connor, meanwhile, has rejoined the Under-21s and should feature against Sweden on Tuesday despite a slight hamstring problem.

That leaves the manager with a squad of 25 to which, he says, he will not add and if there is a spot to be filled it appears to be on the right, rather than the left of his front three, the one that had been earmarked, it seemed, for Robbie Brady, had he been that little bit fitter.

McCarthy’s praise for both Maguire and Robinson after Thursday’s game suggests they are both among contenders to start there despite his observation that they are both better on that left flank.

Both have been guilty before of failing to make their presence really felt when it mattered, though. That, at least, is one charge that nobody could ever level at McClean.