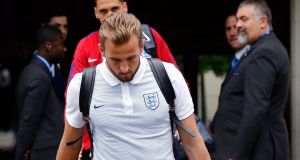 Playing football for the Republic of Ireland carries with it the duty to engage in some activities you’d probably rather skip. For a puzzled Robbie Brady, one of those involved obliging Minister for Sport Shane Ross with a high-five after the eternal Indie-kid of Leinster House held his palm aloft like Dusty Baker to greet the Irish heroes.

Like all homecomings post-Italia 90, the team’s return to Dublin Airport was a mixed bag of emotions and protocol.

Martin O’Neill struck a reasonable tone by stating that Ireland’s players had “done their talking on the pitch”. And they did, even if the things they said varied wildly from game to game.

John Delaney, meanwhile and not unexpectedly, reached for a bloody and romantic comparison by invoking the centenary of Easter 1916 and the sacrifices of Pearse and Connolly to contextualise what the Irish team had achieved at Euro 2016. The FAI CEO was probably still surfing the wave of intense national pride which followed Ireland’s magnificent 1-0 win over Italy and that opening half against France when, for a short time, anything seemed possible.

But as Brady or Wes Hoolahan or Jeff Hendrick would undoubtedly agree, there is a huge difference between conjuring up a fantastic international goal or tearing into Paul Pogba or curtailing Zlatan Ibhrahimovic and, for instance, declaring independence from the British empire, engaging in open warfare on the streets of Dublin, getting arrested, summarily tried and swiftly executed by gunfire.

The sight of Roy Keane politely applauding this burst of guff from Delaney was probably the most striking demonstration of the fact that, right now, the Irish football camp is a happy one.

That hugely persuasive 90 minutes against Italy – and it was the depth of the performance that mattered as much as Brady’s goal – changed everything.

And as it turned out, Ireland did just as well in the tournament as mighty England.

It was hardly Harry Kane’s fault that Britain voted leave. But Kane and company were held up for ridicule and the delight in their misery and humiliation was general. In the sound and fury afterwards, there was something chillingly true about the calm, matter of fact denunciation of the Premier League by Dietmar Hamann on RTÉ, who called out the jewel in the FA crown as ‘a fraud’.

Grousing that the Premier League is overrated has become common place.

But the idea that the jewel of English football is an outright deception suddenly made sense as England’s finest made their way off the field in Marseilles, dazed and confused. This is why England’s footballers play as if in a hall of mirrors against Iceland and why they seem destined for such career-defining embarrassments.

What was the will-he won’t-he (he will!) reunion between Ibrahimovic and Jose Mourinho at Old Trafford if not the beginning of one of the sure-fire football soap story lines of winter ’‘16-’17 ?.

The importation of superstars to the best/richest English clubs means that the local boys are slowly but surely being relegated to the role of supporting cast.

As Hamann asked: how many of that England team would be targets for Barcelona or PSG or Real Madrid? He wasn’t even scathing in his evaluation. He was just telling it like it was. The Premier League is untouchable as a marketing device but inferior as a football league. Losing to Iceland was, more or less, where the cream of England’s footballers are at.

O’Neill and the Ireland players must have wondered as they watched the Icelanders celebrating on Monday night.

They can’t overstate it but the Irish squad departed the tournament feeling that exhaustion undid them as much as French ability. This weekend, Euro 2016 will march towards its crescendo without a definite sense of having separated the wheat from the chaff. The tournament has been noisy but less than brilliant, with no conspicuously brilliant team.

Could Ireland have gone further? And how much, besides the indefatigable high spirits of the fans, did they bring to the tournament as a football spectacle?

In the hours after Ireland lost to France, the football writer Michael Cox whipped off his opinion on Twitter. The tweet was a fairly damning summary of the Boys In Green as a football outfit. “Ireland were poor at this tournament. Technically and physically inadequate. Very fortunate to meet half-arsed Italy in final group game.”

It didn’t take long before the critique was met with general indignation.

It stood in cold contrast to the prevailing mood in Ireland; that the team had bowed out with valour intact; that the emergence of Hendrick and Brady as likely Premier League acquisitions was encouraging; that Ireland was blessed with prize-winning football fans beloved by all. The timing of the report struck a nerve.

Rightly or wrongly (and it seems to me the main failing with Cox’s evaluation is that it failed to recognise the passages of genuine, quality play from Ireland) there is no question that anyone is entitled to make whatever assessment they like.

And you have to wonder what watching games featuring Ireland is like for neutrals football fans; for the vast majority not caught in the grip of national fervour and the traditional thrill of taking down a big football nation. Will it always be so?

There was a strong League of Ireland thread running through the Republic of Ireland team at Euro 2016. There are Irish coaches who know they played their part in developing players like Hoolahan and Brady and Coleman and Ward.

Back in the mad, hazy days of Italia ’90 – of the team containing McGrath, Moran, Staunton, Houghton, Aldridge, Quinn – young Irish players made it by emerging from England’s club apprenticeship system, which hadn’t changed much since the Second World War and which worked just fine. That was then.

England’s latest major tournament failure is another stark illustration of how poorly the Premier League clubs’ academy structures fare in comparison to those in Germany or Belgium or even Iceland.

How many Irish players will emerge from England’s academies in the years ahead? And what kind of players will they be? And if Iceland can put in place a rigorous and exacting domestic underage coaching strategy, why can’t Ireland?

“But we start again tomorrow,” vowed Delaney as the curtains closed on this odyssey.And no doubt, the players will come back ready to play until they drop in their bid to make the next World Cup. They are as honest as any team can be and the fans will love them for that.

But it is time, also, to start afresh and try to imagine what kind of Ireland team is possible for Euro 2024- presuming, of course, that the continent still exists.