Jose Mourinho struggles in the shadow of Ferguson, and his past self 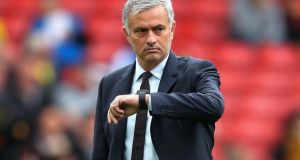 ‘You’re coming to Watford,” said Paul Scholes, not quite able to suppress his contempt at the sight of his Manchester United falling apart against Elton John’s mob.

It’s not yet October and already the advance obituaries for Mourinho’s reign in his dream job have begun to appear. The climate of frantic hyperdrama is surely what Mourinho meant when he spoke enigmatically of “the new football” and McManaman might well belong to the long-list of culprits who Mourinho dismissed as the “Einsteins” whose voices crowd the football world. He can’t have been surprised. It will be entertaining if Mourinho revives the fortunes of United; it will be sensational if he fails to.

“I have a problem which I’m getting better at everything related to my job since I started,” Mourinho said in an interview with the Telegraph in the autumn of 2015, just before his stewardship at Chelsea began to unravel.

The remark was typical Mourinho: comically conceited on the surface but held together by his past record and his helplessly blunt honesty. When they head-hunted Mourinho, the United executive determinedly ignored the spectacular act of self-sabotage and disillusionment which saw him sacked by Chelsea less than half-way through their Premier League title defence.

In a way, the wonderful trick by Claudio Ranieri and Leicester in imposing a fantasy football story on the real world last season was perfect for Mourinho. At least Arsene Wenger, for whom he reserves a special loathing, hadn’t triumphed in his absence. Van Gaal’s misfiring season was not saved by the FA Cup victory which proved his swansong. Chelsea didn’t just surrender their title; the defending champions finished a pitiful 10th and a staggering 31 points adrift of Leicester.

Still, as he walked into the United manager’s office, Mourinho must have had to pretend that the three years after Ferguson left hadn’t happened. Part of him must have chosen to erase all recognition of the public and critical mauling David Moyes endured during his fraught 10-month reign which was undermined and doomed from the moment it began.

And he must have banished from his mind all images of the increasingly stricken, harassed figure which Louis van Gaal cut in his last months of United, a managerial experience stripped of all the schoolmasterly authority which had been his calling card. He had to ignore that he was stepping into both the biggest football club in the world but also inheriting a team which had lost its identity. The strongest characters within United’s last league winning team – Robin van Persie, Nemanja Vidic, Rio Ferdinand, Patrick Evra and, of course, Ryan Giggs and Scholes, are no longer at the club.

Goalkeeper David De Gea is the most consistent link, apart from Wayne Rooney – whose deteriorating form constitutes a separate crisis in Manchester – and Michael Carrick, who was favoured by Mourinho in Wednesday night’s relieving League Cup win over Northampton.

Mourinho made his trophy signings, Zlatan Imbrahimovic and Paul Pogba and has had to quickly assemble a team around them composed of remnants of the Ferguson era and misfits from the following years.

If his team had a hastily constructed, learning-on-the-hoof look, then it showed in that baggy, uncertain 3-1 defeat at Vicarage Road. The defeat to Manchester City and to Pep Guardiola, his nemesis, was a hurtful loss in their ongoing war for smartest-football-man-of-all-time award.

Following the third loss, to Watford, the most troubling aspect of Mourinho’s post-game attitude was the lack of defiance and fire and energy. He seemed strangely accepting. The comments after the Northampton win, delivered to Manchester United’s in-house television channel, didn’t do much to convince otherwise.

“I know they tried to delete 16 years of my career. They tried to delete an unbelievable history of Manchester United football club and to focus on a bad week after three bad results.” Even Friday’s return to sardonic wit lacked Mourinho’s appetite for debate and confrontation.

On one level, Mourinho’s griping has substance. United simply had a poor week at the office: they lost three games on the trot. No team has a divine right to win games. But the unwritten rule of Premier League culture means that the super clubs cannot lose to lesser teams. That’s why McManaman predicted that if United’s black run continued, then the club was going to have to do “something drastic”.

The version of Jose Mourinho who first stormed through English football would never have made a plea for the way things used to be. He is fooling himself about attempts to erase United’s glittering history: yet he hit on a grim truth when he complained about the attempted airbrushing of his own achievements. The novel glories at Porto; the barnstorming years at Chelsea; the versatility with which he transferred his managerial chops into domestic and European success at Inter: a stunning record in which the club always seemed to play second fiddle to the man.

At 53, after a bright and insistently restless career, he has arrived at the point in his football life which would see him claim a true home.

A win over Leicester at lunch time on Saturday will quell the voices but with a new revelatory book just published and away games at Liverpool and Chelsea looming on the October horizon, Mourinho is going to need all of the old attitude and cunning and energy.

But he will be glad to put some distance between himself and that Watford game. The last time United lost to Watford was thirty years ago, in the midst of a string of results which hastened the sacking of Ron Atkinson and the appointment of a flinty young Scotsman. New football may be merciless but the old game was brutal too.