‘We have no Messi, we have no Ronaldo, but we have Shane Long, we have the others’ 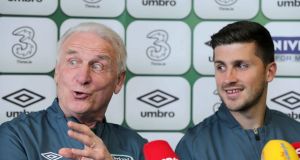 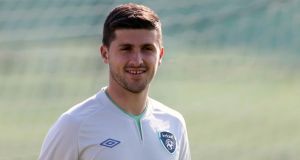 Republic of Ireland’s Shane Long will captain the side against Georgia. Photograph: Niall Carson/PA Wire

Giovanni Trapattoni will complete a circle of sorts when he sends his new-look team out against Georgia this evening. The Italian will use the friendly to assess the depth of his squad ahead of Friday night’s World Cup qualifier against the Faroe Islands.

However, it is also a repeat of his first competitive fixture as Ireland manager when the Republic took on the Georgians at a neutral venue in Mainz, Germany in September 2008 as they set out on what they hoped would be the road to the World Cup finals in South Africa.

They were ultimately to be denied on a cruel and controversial evening in Paris, but it was there the veteran Italian unfolded his masterplan as his system helped to secure a 2-1 victory.

Almost five years on, Trapattoni’s continued presence in the job remains a topic of extended debate, but he believes much has changed, and for the better, in the meantime.

“But it is not finished.”

Only five of the men who started that afternoon in Germany — John O’Shea, Richard Dunne, Glenn Whelan, Aiden McGeady and Robbie Keane — are included in the current squad, and none of them will start tonight.

However, Trapattoni’s philosophy throughout his tenure, to the annoyance of his critics, has revolved around a system into which other players can slot with the minimum of fuss. As a result, he will expect the men who walk out against Georgia, to perform the same function as their more senior colleagues did in Wednesday night’s creditable 1-1 draw with England at Wembley.

Trapattoni said: “This is another opportunity. I will show them before the game what our team did well against England. They can understand only with this attitude and this performance with our quality, we can achieve every result. “England was a tough game, but we also have to realise that it will not be easy against Georgia because Georgia have players playing in Russia in the strong teams, they play in Germany, they are international players.

“They lost against Spain, okay, but lost in the last 10 minutes. The achieved a draw with Finland. They have very good players, important players and it will be important for us and our attitude how we can achieve a result.

“With results, will grow enthusiasm, grow conviction, grow confidence and trust that we can play everywhere against everybody with our quality.

“We have no Messi, we have no Ronaldo, but we have Shane Long, we have the others. We have a team and a squad which can do well with our system and with our attitude.”

Striker Long, one of only two men to survive from midweek — the other is James McCarthy and both men are suspended for the Faroes game — will captain the side in the absence of Keane.

He will be partnered by Simon Cox with Keiren Westwood taking over in goal, with Paul McShane, Richard Keogh, Damien Delaney and the fit again Marc Wilson making up the back four behind a midfield quartet of Andy Keogh, Wes Hoolahan, McCarthy and James McClean.

There will be a place on the bench too for defender Dunne, who has not played a single game all season because of a persistent groin injury.