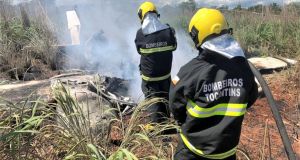 Firefighters at the crash site in the northern state of Tocantins. The plane was consumed by fire. Photograph: Tocantins State Firefighters Handout/EPA

Four players and the president from the Brazilian football club Palmas died in a plane crash on Sunday. The group were travelling separately from the rest of the team after testing positive for coronavirus, the club have said.

The private plane carrying the group plunged to the ground at the end of the runway shortly after take-off at an airport in the northern state of Tocantins. The unnamed pilot also died in the accident, with the cause of the crash not immediately clear.

The team were on their way to the central region of Goiânia to play a Copa Verde match against Vila Nova. The victims were identified as the club president, Lucas Meira, and the players Lucas Praxedes, Guilherme Noé, Ranule and Marcus Molinari. There were no survivors on board.

The players were travelling together because they had tested positive for Covid-19, club spokesperson Izabela Martins said. Martins said Sunday would have been their last day of isolation and the rest of the team, who play in the fourth tier of Brazilian football, had planned to travel on a commercial flight.

Chapecoense, the club that lost 19 players in a plane crash in Colombia in 2016, released a statement offering their support. “Unfortunately, we know what this moment of pain is like and we wish that no other group had to feel the same,” Chapecoense said in a statement. “You won’t go through this alone.”

The Brazilian football association expressed solidarity with the players’ family members and Palmas fans in an official statement, and called for a minute’s silence before all matches played in the country on Sunday.

In a statement Fifa said: “Football extends its deepest sympathies to the victims and their families at this difficult time.”

Alejandro Domínguez, the president of Conmebol, South American football’s governing body, also offered his condolences. “I deeply regret the plane crash that affected Palmas,” he said on Twitter. “My condolences to all those who make up the club, [and] family and friends at this sad time.”

Tocantins fire officials reported the twin-engine Baron model had a capacity of six occupants. When firefighters arrived at the crash site, 500 metres from the runway, the aircraft was consumed by fire. At least two explosions were registered, according to the official report. – Guardian