In airing Benfica’s secrets, a hacker angered fans - his trial judge is one 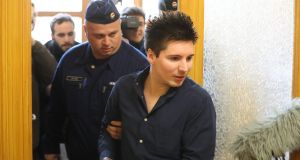 The judge’s allegiance to Benfica, the biggest soccer club in Portugal, hardly made him an outlier.

Benfica often boasts that it can count more than half of Portugal’s population as supporters, and judges, prosecutors, top police officials and even the country’s prime minister are regular guests in the directors’ box at the team’s matches. One judge has been so loyal, in fact, that he was honoured last year with a Golden Eagle lapel pin, symbolic of his half-century affiliation with the club.

So when it was revealed that a judge, not the one given the lapel pin but another one, had joined the legion of critics assailing a 31-year-old computer expert, Rui Pinto, who had embarrassed Benfica by publishing some of its darkest secrets online, few rushed to the hacker’s defence.

But to lawyers for Pinto, who is scheduled to stand trial this summer, the judge’s fandom was a serious problem: He had been assigned to oversee their client’s case.

State capture is done through the capture of people who are in an institutional position in the state, and of course one key pillar is the justice system

“You don’t feel at ease,” Pinto’s Portuguese lawyer, Francisco Teixeira da Mota, said in a telephone interview. “Of course, we would like someone who is not committed to Benfica.”

Benfica’s reach, though, may make that difficult. The Lisbon team is the biggest of Portugal’s three most powerful clubs, a sporting and media colossus whose influence extends into nearly every aspect of daily life in the country.

It is a team whose victories are celebrated, whose losses are mourned and whose fans hold positions of power in everything from media to banking to government.

That power, Benfica’s critics say, affords the club and its leaders a type of leverage that extends far beyond the soccer field, and explains why some refer to it as the Octopus.

Ana Maria Gomes, a career diplomat turned anti-corruption campaigner, said in a recent interview that she believed Benfica’s outsize influence had given it a privileged status in Portuguese society, particularly when it came to legal matters.

The phrase she used to describe that status – “state capture” – refers to the notion that private entities like corporations, or maybe even a popular sports team, can grow so powerful that they are able, if they choose, to unduly influence the state itself.

“State capture is done through the capture of people who are in an institutional position in the state, and of course one key pillar is the justice system,” said Gomes, who has been campaigning on Pinto’s behalf. “If you have judges who are captured, or don’t mind having the appearance of being captured, we have a problem.”

Benfica did not respond to a request for comment. For now, it is Pinto, though, who may have the biggest problem of all. In crossing Benfica and exposing its secrets, he has made a formidable enemy. Arrested last year in Hungary and extradited home to Portugal, Pinto now faces 25 years in prison for his hacking, which unearthed not only the secret documents of Benfica, but also others related to players, prominent agents and even the office of the country’s attorney general.

The disclosures were hailed in some corners for shining a light on the underbelly of the world’s most popular sport, but for now they are producing only anxiety for Pinto. That is because his fate now rests, potentially, in the hands of a judge, Paulo Registo, who may already have signalled he believes the defendant is guilty.

After being picked to preside over Pinto’s trial, Registo worked quickly to delete social media posts linking himself to Benfica, but not before they had been noticed by journalists and others. In one, the judge was reported to have liked a post that described Pinto as a “pirate”.

“The judge that will judge Rui Pinto doesn’t hide his love for Benfica,” read one headline from a news outlet that reprinted some of the messages. That association offered more ammunition to critics who have long bemoaned what they considered to be a close relationship between Portugal’s most important institutions and Benfica. But it was not the first time he had overseen a case closely linked to his favourite team.

Before he was named to lead Pinto’s trial, Registo served on a three-judge panel overseeing a case involving Benfica’s former legal director, Paulo Gonçalves. The legal director was accused of trading perks like prime seats and club merchandise to two court officials who are accused of illegally gaining access to details of ongoing investigations into Benfica and then passing that confidential information to team officials.

Yet even though he was the head of the club’s legal department, and his actions benefited the club, the court allowed Gonçalves to obscure his links to Benfica by claiming he had acted in a private capacity. A court of appeals judge later complained that Benfica itself should have been charged.

But, then, Registo was not the only judge handling a case in which Benfica held an interest who was later revealed to be a devoted supporter of the club.

Last year, in March, the judge who received the prized Golden Eagle lapel pin, Eduardo Rodrigues Pires, only belatedly asked to be recused from a case in which Benfica’s great domestic rival, FC Porto, was seeking to overturn a ruling ordering it to pay €2 million for disseminating confidential Benfica documents on its television channel. (A supervising judge rejected his request to step aside, declaring that Pires’s passion for Benfica could not possibly influence his impartiality as a judge.)

Shortly after being selected to hear the case, Pires, who also owned stock in Benfica, was invited by the club to visit its training complex. Porto is appealing the ruling, but the frequency of outcomes that appear to have benefited Benfica and the contents of some of Pinto’s leaks – which included a database with the names and addresses of some of Portugal’s most senior judges and notes on games they had been invited to attend – have renewed questions about how far the club’s influence extends.

“You need to understand Portuguese history to understand the importance of football in our culture, politics, even in our everyday lives,” said Mário Figueiredo, a former president of the Portuguese league. He said that several of the presidents of Portugal’s three biggest clubs had often found themselves in legal trouble, but that none had ever been prosecuted while in office.

“Being the president is a form of protection,” he said. More than a decade ago, for example, Porto’s long-time president, Jorge Nuno Pinto da Costa, was cleared of involvement in a corruption scandal after wiretap evidence that appeared to link him to a scheme to bribe referees was deemed inadmissible by a judge.

Whether Registo will continue to oversee the Pinto trial is less clear.

Last Monday, after details of his links to Benfica were published by Portuguese news outlets, and after Pinto’s lawyers complained, Registo wrote to the court of appeals, asking to be recused. No decision on his request has yet to be made.

Benfica said it would seek legal action against Pinto and “all the criminals that have hacked, robbed and insulted this centennial institution.”

The club suggested Pinto’s actions had been financed by unidentified overseas entities and international groups of hackers with the support of politicians, international organisations and media from across Europe and the United States.

1 Solskjær praises Martial for building himself into ‘powerhouse’ centre forward
2 No final round heroics for Rory McIlroy at US PGA
3 Ronnie O’Sullivan beats Ding to reach Crucible last eight
4 Liverpool to sign Olympiakos left back Kostas Tsimikas
5 Ben Stokes to miss rest of Pakistan series due to family reasons
Real news has value SUBSCRIBE
Crossword Get access to over 6,000 interactive crosswords