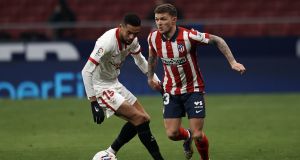 Fifa has dismissed Atlético Madrid’s appeal against Kieran Trippier’s ban for breaching English Football Association betting rules, but there is still hope he could be able to continue playing.

The 30-year-old Atlético Madrid and England full-back was hit with a 10-week suspension last month after advising a friend by text message to “lump on” his move to Madrid from Tottenham in 2019.

Atlético appealed against the suspension but football’s world governing body announced on Monday it had been dismissed.

“The Fifa appeal committee has dismissed the appeal lodged by the club Atlético Madrid in a case concerning the player Kieran Trippier, ” a statement read.

“As a consequence, the decision of the Fifa disciplinary committee passed on 23 December 2020 is confirmed, extending sanctions imposed on the player by the English FA to have worldwide effect.”

However, the FA failed in its attempt to revise the dates of Trippier’s ban, which would mean if the club now appealed to the court of arbitration for sport he would be free to continue playing.

The FA had wanted to revise the effective dates of the ban, which ends on 28 February, but its own independent regulatory commission has dismissed the application.

Trippier was found guilty of four of the seven charges against him. He missed two La Liga games due to the ban but returned and provided an assist in last Tuesday’s 2-0 win over Sevilla which kept Atlético top of La Liga.

5 The Beirne identity: Tadhg feels the pull of the green