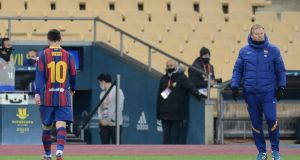 Barcelona coach Ronald Koeman defended his decision to start Lionel Messi in Sunday’s Spanish Super Cup final after the Argentine was sent off for the first time in his club career as Athletic Bilbao won 3-2 after extra time to lift the trophy.

Messi had missed Wednesday’s semi-final win over Real Sociedad through injury but before the final Koeman said he would allow the forward to make a decision on his fitness.

“I think after so many years at the top level, he knows when he can play and when he can’t,” Koeman told a news conference after the defeat. “I spoke with him and he said he was fit enough to start the game.”

Messi was lively early on and heavily involved in Barca’s opener, but he visibly tired and was kept out of the game by Bilbao as it wore on.

His frustrations got the better of him and reached boiling point in the final minute of added time as he struck Asier Villalibre and was dismissed following a VAR review.

“I can understand what Messi did,” Koeman said. “I don’t know how many times they fouled him, and it’s normal to react when they keep trying to foul you as a player who is looking to dribble with the ball, but I need to see it again properly.”

Given the red card was shown for violent conduct, Messi is likely to face a four-game ban across La Liga and the Copa del Rey.

The Catalan club face neighbours Cornella in the Copa round of 32 in midweek, while they sit third in La Liga, seven points behind leaders Atletico Madrid having played two games more.