FAI board expected to discuss severance package for Delaney 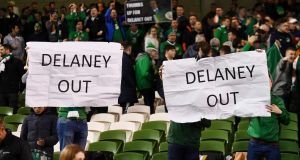 An FAI council member said on Saturday that John Delaney had told him he was about to resign from his current position as the association’s executive vice president. File image: Reuters/Clodagh Kilcoyne

The board of the FAI is expected to hold further discussions on the terms of a severance package for the organisation’s former chief executive, John Delaney, at a meeting on Monday.

Their hope is that the basis for something that might be presented as an amicable parting can be agreed.

That is an important objective for Delaney in the context of his future ambitions in Uefa but their deliberations take the place in the context of what has been an intensely difficult week both for the 51 year old and his employers.

FAI council member John O’Regan said on Saturday that Delaney had told him he was about to resign from his current position as the association’s executive vice president but the former chief executive is believed to have a severance clause in his contract and the prospective cost of securing his departure on the terms initially envisaged is said to have split the board ahead of Monday’s meeting.

The pressure to progress the situation has been increased by a statement over the weekend from Minister for Sport Shane Ross who made it clear that, in addition to the suspension of nearly €1.5 million in programme-related Government funding from Sport Ireland, the association would not be regarded as eligible for capital project funding until its various governance issues have been resolved satisfactorily.

A couple of the projects potentially affected - planned improvements to the Aviva Stadium ahead of games being staged there as part of the Euro 2020 finals and the redevelopment of Dalymount Park - are ones that Delaney would have wanted to be seen as part of a positive legacy. Instead, there is a growing sense now that for the required funds to be made available for these and other stadium and training ground developments in Cork and Donegal, Delaney may have to depart.

His position has been a matter for intense debate since his appearance before the Oireachtas Committee for Transport Tourism and Sport last Wednesday where he declined to answer questions relating to his time as chief executive of the association, citing legal advice.

In a statement, however, he provided an account of the events surrounding what he says was the loan of €100,000 to the association in April 2017, when, it is claimed, the organisation was going through a particular problem with its cash flow.

The money is said to have been paid back two months later without interest or charges but the matter should still have been recorded in the association’s annual accounts. Delaney says he asked the then FAI finance director, Eamon Breen, what the reporting obligations were in relation to the transaction but declined to say what reply he received.

Delaney said, however, that he had told just two other directors, still serving honorary secretary Michael Cody and then association president Tony Fitzgerald, at the time and that the matter “did not arise,” at the board meeting that took place shortly after the money been returned in June. The rest of the board was not told for another two years.

Questions have also been raised about Delaney’s use of a company credit card. The Sunday Times published a report concerning his use of the card but the FAI declined to comment on it and it is not clear what he had been authorised to do by his employers.

“If he was authorised to use the card in the manner described in The Sunday Times, then no issue arises in the employment context but the misuse of a company credit card could constitute misconduct” says Michael Kennedy, a partner at Dublin legal firm ByrneWallace and specialist in employment law.

“An allegation of misuse by an executive of a company credit card would normally give rise to a process which would involve putting the allegation to the executive and affording him the opportunity to respond at a properly convened meeting, at which he would be entitled to representation.”

In the majority of cases, deals are struck and payments made are most commonly somewhere between nine and 15 months remuneration. Delaney is currently understood to earn around €120,000 in his role as executive vice president of the association.

Professor Niamh Brennan, a governance expert at UCD, described the performance of the wider FAI delegation in front of Oireachtas Committee on Wednesday a “embarrassing,” and suggested that the ongoing uncertainty regarding Delaney’s position is in itself likely to be causing further damage to the association’s reputation in the area of governance at this stage.

“It seems to me that things are coming to a head in terms of having John Delaney involved,” she says. “It becomes a situation where the benefits of loyalty to a very dominant CEO are increasingly hard to justify as the cost of that loyalty continues to rise.”

Resisting the pull of The Field, Tiger Woods proves fitness in Covid-19 charity match
Here is your handy guide to sport on television this week

1 European clubs must take lessons from financial demise of former greats
2 Munster braced for worst of financial crisis due to Thomond Park debt
3 Seán Moran: Horan’s cautious approach under growing pressure
4 From history to food: Players take chance to focus on life after rugby
5 Coming fourth in the Olympics didn’t change this fearless quartet, time did
Real news has value SUBSCRIBE
Crossword Get access to over 6,000 interactive crosswords