Championship side Brighton miss an upset opportunity in FA Cup 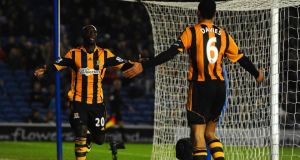 Yannick Sagbo of Hull City celebrates with Curtis Davies after scoring his side’s equaliser in the FA Cup fifth round tie against Brighton at Amex Stadium. Photograph: Mike Hewitt/Getty Images

Brighton 1 Hull 1: Brighton and Hull will have to do battle again for a place in the FA Cup quarter-finals after Yannick Sagbo struck a late equaliser for the Premier League side.

The Seagulls looked set to reach the last-eight juncture for the first time since 1986 thanks to Leonardo Ulloa’s quality first-half goal, only to see a mouth-watering home clash with Sunderland and former manager Gus Poyet put on hold.

The Uruguayan’s three-and-a-half year spell with the Seagulls came to acrimonious end in the summer, with his first return to the Amex Stadium dependent on whether Brighton can win the replay after Sagbo’s late strike made it 1-1.

It led to a frantic end to what had been for the most part a disjointed match, thanks in no small part to the sides’ combined 13 changes for the fifth-round clash.

There were few chances of note until Sagbo stretched to send an unconventional volley onto the crossbar in the 27th minute – a strike that appeared to kick-start proceedings.

Just three minutes later Brighton went ahead through Ulloa, who played an impressive one-two with Will Buckley before dinking over Allan McGregor.

Hull threatened an immediate leveller as Curtis Davies’s header hit the woodwork, but that was as close as Steve Bruce’s side came until five minutes from time when Sagbo struck home after collecting a cross from Sone Aluko, making his first start after four months out with an Achilles injury.

Both teams had late chances to snatch victory, but Davies and Jake Forster-Caskey were both in the right place to clear headers off the line.