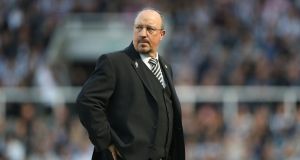 West Ham United are ready to make a formal approach for Rafael Benítez and are giving serious consideration to triggering the £6 million (€6.8 million) release clause in the Newcastle United manager’s contract.

Benítez is the east London club’s first choice to replace David Moyes, with Manuel Pellegrini’s wage demands likely to prove prohibitive, and there is increasing concern at Newcastle that he will move to the London Stadium if he receives a satisfactory offer. Although West Ham have misgivings about how much it will cost in compensation to appoint the Spaniard, who has a year left to run on his contract, there is an increasing belief that he would represent value for money.

They have admired Benítez for a long time and almost appointed him after parting company with Sam Allardyce three years ago, only for Real Madrid to swoop in before a contract could be finalised. The two parties have remained on good terms and West Ham are hoping to capitalise on Benítez’s growing dissatisfaction with life at Newcastle, who have yet to commit to giving him more backing in the transfer market.

However, there will be complications to iron out before a deal can be agreed. West Ham are concerned that there will be further compensation if Benítez ends his spell on Tyneside and they have also been told that the Spaniard wants his contract to contain a large severance package. They would also have to convince him that he will receive funds to strengthen an unbalanced squad. It is understood that Moyes was dissatisfied with the money available for signings this summer.

David Sullivan, West Ham’s co-owner, expressed a determination to make a “high-calibre” appointment by the end of next week after Moyes informed him that he no longer wished to discuss a new contract on Wednesday morning. Although there is interest in Pellegrini and Unai Emery, the former Paris St-Germain manager, Benítez is regarded as the strongest candidate given his pedigree and knowledge of English football.

Sullivan knows that supporters are waiting for him to prove his ambition by making an exciting appointment. He interviewed Paulo Fonseca at his Essex mansion on Monday afternoon but it has since emerged that the Portuguese is likely to extend his contract with Shakhtar Donetsk.

News of Sullivan’s talks with Fonseca was followed by Moyes deciding that he did not want to continue as West Ham’s manager after growing tired with his treatment. The Scot felt undervalued after saving West Ham from relegation. His six-month deal ran out on Sunday night and he decided to seek new opportunities after it became clear that West Ham wanted to speak to other candidates before considering whether to extend his stay.

West Ham hope to interview Pellegrini, although the Hebei China Fortune manager’s wages remain a stumbling block. It is understood that Marco Silva, who is widely expected to replace Allardyce at Everton, is not attracted by the vacancy at West Ham.