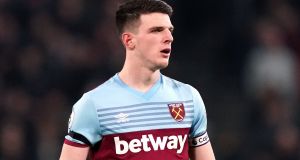 West Ham are determined not to sell Declan Rice despite growing interest in the England midfielder from Chelsea.

It remains to be seen how the financial impact of coronavirus will affect the transfer market but Chelsea are contemplating beefing up their defensive midfield options. The 21-year-old started his career at Stamford Bridge and is thought to be interested in returning to his boyhood club, especially as it would allow him to reunite with his best friend, Mason Mount.

Although Chelsea have no shortage of competition in Rice’s position, Frank Lampard has struggled to find his favoured combination in midfield. Injuries have hindered N’Golo Kante and Jorginho, linked with Juventus, has not entirely convinced since joining two years ago.

There was talk of a summer clearout before the season was postponed and Lampard, who has also expressed an interest in Lille’s Boubakary Soumare, is not alone in being impressed with Rice.

Yet prising Rice from West Ham will not be easy. The midfielder’s deal runs until 2024, with an option to extend it by a year, and he is by far the most valuable player in David Moyes’s squad.

Although West Ham will be in an awkward financial position if the Premier League season does not resume, it is understood Rice is the last player they will look to sell if they need to balance the books. They would demand at least £70 million (€80 million) and insist they have had no contact with Chelsea, for whom that fee may be too much.

West Ham are preparing to raise at least £30 million (€34.5 million) via a rights issue next month and, like most clubs of their size, are in a difficult financial position. Moyes wants to build a team around Rice, who has also been targeted by Manchester United, and will look to discard other players first.

Carlos Sanchez, who earns around £65,000 (€75,000) a week, and Jack Wilshere are out of contract this summer, and Andriy Yarmolenko and Felipe Anderson face uncertain futures under Moyes. – Guardian