After hearing of a similar fundraiser in Spain, Joanne O’Riordan got on the case 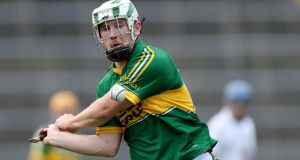 Careful what you say out loud. Joanne O’Riordan happened to mention to a friend one night recently that in Spain, Real Betis players had organised a La Liga-wide FIFA tournament (the video game, before anyone calls the authorities). “And they said, ‘Sure you could recreate that here,’” O’Riordan says now. “My first thought was, ‘Well, that’s a lot of hope you’re pinning on me there.’

“But I got in touch with the GPA and with Insomnia Games and thankfully they were very helpful and super-interested in what was going on. We managed to get somebody from every county. It was touch and go for a while but we got there.”

Which is how we got here. Across the bank holiday weekend, an All-Ireland Championship of sorts will take place, organised by O’Riordan, the Irish Times columnist and health campaigner. It will be organised on the old-style football championship format – very old-style, as Kilkenny will be taking part in the shape of defender Paddy Deegan – and will be streamed live on YouTube and Facebook across three nights, starting at seven o’clock. All money raised will go to frontline workers in the HSE and NHS across the island.

The draw for which counties get assigned to which Champions League team takes place on Wednesday and with the GPA’s help, every county has put someone forward. Indeed, a few of them had so many takers that they needed preliminaries to pare it down to one per county. It led to the occasional big-name casualty, including O’Riordan’s Legion clubmate James O’Donoghue in Kerry.

“Yeah, James wants €300 back from me because he bought a new PlayStation to take part and then he went and got beaten in the preliminaries,” O’Riordan says. “He lost 4-1 by Pádraig Boyle, the Kerry hurler. Sent me a pretty abusive text afterwards, actually. So he’s not talking to me because of it. We were on a Zoom call with the club later that day and he was still ignoring me. Sound, James.

“We wanted the mass representation. We wanted it to feel as All-Ireland-ey as possible. It should be good craic. Micheál Ó Muircheartaigh is doing some bits of voiceovers for it to make it a bit more GAA-ey, if that’s a word. It’s a word now I guess. We had a conversation with RTÉ but unfortunately they can’t stream it live. Apparently a lot of people aren’t interested if Oisín Gallen’s wifi goes down. So they’ve asked for insert packages and stuff like that so they can maybe use them on the news or whatever. But it will be livestreamed on YouTube and Facebook.”

The way it has worked out, there is more or less a 50/50 split between footballers and hurlers taking part. Deegan and Wexford’s Rory O’Connor are the most high-profile hurlers, with footballers Niall Morgan of Tyrone, Monaghan’s Conor McCarthy, Donie Smith from Roscommon and Clare’s Kealan Sexton also involved.

“I thought it would be a good way for the lads to relieve anything that’s going on in their lives,” says O’Riordan. “They’re not seeing any of their team-mates, they’re not in the routine they were used to. It’s funny, the GPA were telling me that in a lot of cases, this was the first time a lot of younger members of county panels were really engaging with older guys.

“You know when you come on a county panel first, you kind of keep yourself to yourself and especially given the lockdown now, you’d have a lot of younger players who just wouldn’t know some of the older players at all really. They might just have been in the first few months of their intercounty career when the lockdown came. So a few lads have said they weren’t even really too sure how to hang out with the more established individuals but now, through this, they’re linking up non-stop playing FIFA.”

Ultimately, the aim, like so much else happening during the lockdown, is to raise some money. O’Riordan has first-hand experience of what the frontline is like, having had to isolate along with a HSE worker for the first two weeks of the lockdown. Moreover, she has close family who are being cared for in Millstreet hospital who she can’t have any contact with. In rough times, she’s doing what she can.

“Hopefully it raises a bit of money as well. My grandmother and uncle are in care settings as well. I’d love to be able to see them but I can’t. It was my birthday last Friday and I would have loved to go and visit my grandmother but obviously I can’t.

“Everybody is going through things like that and just seeing it makes you want to apply any asset you have to do whatever you can do. Hopefully this raises a bit of money and even beyond that, hopefully it can be a bit of diversion for a night or two.”