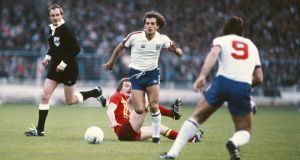 Former Chelsea captain and England midfielder Ray Wilkins has died in hospital following a cardiac arrest. He was 61.

Wilkins, who won 84 England caps, had been treated in St George’s Hospital in Tooting, south-west London since Friday.

St George’s Hospital confirmed Wilkins had died on Wednesday morning, and issued a statement on behalf of the family.

“It is with great sadness we announce that Raymond Colin Wilkins passed away this morning,” the statement, posted on the hospital’s website read.

“We would like to thank St George’s staff for the amazing work they have done to care for our beloved Ray.

“We would also like to say thank you for the many goodwill messages we have received from Ray’s friends, colleagues, and members of the public.

“We are asking for privacy at this very difficult time.”

Wilkins had carried out media duties on talkSPORT and Sky Sports — he was a regular pundit on both platforms — shortly before suffering the cardiac arrest, and was taken to St George’s Hospital on Friday.

He became the fourth player sent off while playing for England when he was dismissed during the 1986 World Cup finals in Mexico in a game against Morocco.

Wilkins — known in the game by his childhood nickname ‘Butch’ — played for 11 clubs and was on the coaching staff of several more, but is commonly associated with Chelsea.

The midfielder started his career there and spent six years with the Blues, while also having numerous stints as assistant manager. On one occasion, he led the side on a caretaker basis.

A statement from Chelsea read: “Everybody associated with Chelsea Football Club is devastated to learn of the passing of our former player, captain and assistant coach, Ray Wilkins. Rest in peace, Ray, you will be dreadfully missed.”

During his career as a player, Wilkins won the FA Cup with Manchester United in 1983, scoring a memorable goal in the first tie against Brighton at Wembley, which ended 2-2. He also won the Scottish title with Rangers in 1989.