Captain of Chelsea at 18, Wilkins enjoyed a fine career on and off the pitch 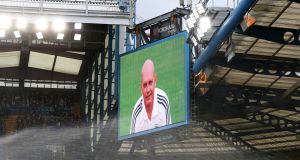 Ray Wilkins is shown on the big screen at Stamford Bridge ahead of Chelsea’s game against Tottenham last weekend. Photograph: Catherine Ivill/Getty

In the eyes of all who watched him captaining Chelsea at the age of 18, Ray Wilkins was a golden boy of English football. To an instinctive vision of the game and a superlative range of skills he was already bringing elegance, composure and, most of all, a precocious sense of responsibility that enabled him to instil a sense of purpose into a team who had just been relegated to the old Second Division.

As a classical inside-forward, Wilkins was always a joy to watch. He led Chelsea back into the top tier in his second season as the captain of a team assembled by Eddie McCreadie, a manager willing to put his faith in youth, before taking his qualities to Manchester United, Milan, Paris Saint-Germain and Rangers. He was respected everywhere he went in those years, from the mid-1970s to the end of the 80s.

He left Old Trafford in 1984 as the supporters’ player of the season in a team who also included Bryan Robson and Arnold Muhren, and is warmly remembered at San Siro, where he spent three years during a difficult era for the Rossoneri and made his exit only when a new owner, Silvio Berlusconi, reshaped the squad around a group of Dutch masters at a time when only two foreign players were allowed. His stay with PSG was brief but at Ibrox he won the Scottish league title and wept with the fans when saying his farewell.

His 84 caps for England – 10 of them as captain – came under Don Revie, Ron Greenwood and Bobby Robson. In a midfield where players such as Bryan Robson, Glenn Hoddle and Peter Reid were also vying for places, he was often the victim of that innate sense of responsibility. He would frequently sit deep, holding position, playing a simple ball and encouraging others to take on the creative role to which he was better suited.

In that way he allowed some observers to persuade themselves that he was an unimaginative player, when the opposite was the truth. The delusion was cemented when Ron Atkinson nicknamed him “The Crab”, for his supposed habit of passing sideways. It would not be the last time that Atkinson’s mouth did more damage than he intended.

Wilkins was not a prolific scorer but his goals could be memorable. United’s fans remember an exquisite left-footed curler in the 1983 FA Cup final against Brighton, while Rangers’ supporters cherish another memorable strike, a sweetly timed right-footed volley from outside the area, for Graeme Souness’s side in an Old Firm match in 1988.

His 10-year England career was spoiled near its end by a moment of hot-headedness that was wholly uncharacteristic but had its origins in his better qualities. Bryan Robson, his former United team-mate, and he started the 1986 World Cup finals in Mexico as the twin pivots of England’s midfield, respectively captain and vice-captain.

Robson, however, had been suffering from a dislocated shoulder before the tournament and should not have been included in the squad. When the injury recurred and Robson had to leave the field during the second group match against Morocco, his tournament clearly over, Wilkins’s frustration led him to throw the ball at the referee while disputing a decision. It was the first time an England player had been sent off during a World Cup finals.

Wilkins came from a west London football family – his father had played for Brentford and Nottingham Forest, and his three brothers all played professionally – and he was reluctant to let his playing career go. After touching the heights he was happy to slide gently down the scale, from Queens Park Rangers and Hibernian to fleeting spells at Wycombe Wanderers, Millwall and Leyton Orient, where he hung up his boots after three games in 1997, aged 40. He had made just under 700 league appearances for his 11 clubs in England, Italy, France and Scotland, scoring 49 goals.

By that time he had already spent two years as player-manager at QPR, taking them to eighth in the Premier League in his first season but to relegation in his second. He spent a year as Fulham’s head coach, taking them to the play-offs in the Second Division (as the third tier was then known) before being removed by Mohamed Al Fayed, the owner, who installed Kevin Keegan, previously the club’s chief operating officer, as manager.

Then came three further spells at Stamford Bridge as assistant first to Gianluca Vialli, then to Luiz Felipe Scolari and finally to Carlo Ancelotti. It was a role and an environment that suited Wilkins perfectly, particularly after the arrival of his friend Carletto, a fellow ex-Milanista. Together in 2009-10 they won the first league and Cup double in the club’s history and Wilkins’s first trophies in his long and intimate association with the club.

“Ray is one of those select few, always present, noble in spirit, a real blue-blood,” Ancelotti wrote in his autobiography. “Chelsea flows in his veins.” But one day at the training centre at Cobham, a few weeks into the following season, he was told that his services were no longer required. The reason was never made public, although it was suspected that he may have said something out of turn in the presence of the owner, Roman Abramovich.

That would have been strangely untypical, since Wilkins was the most well-mannered and courteous of football men. In his later years he provided generous-spirited if often anodyne contributions to Sky Sports and Talksport and after receiving a four-year driving ban, admitted to problems with alcohol. He also suffered from ulcerative colitis and underwent a double heart bypass operation last year.

On TV he was talking to an audience who mostly had little knowledge of his prime as a player. Like Abramovich, they had not been present at Stamford Bridge in the mid-70s to see the young captain return an opposition goalkeeper’s clearance straight back into the net from the halfway line, or to witness him play a pass from the edge of his own area and race up the field to meet the return, scoring with a full-length diving header. Nor had they seen the teenager putting a hand on the shoulder of Peter Bonetti to console Chelsea’s veteran keeper for some disastrous error. That was the real and very remarkable Ray Wilkins.

1 Betting shops face uncertain future as they prepare for Monday reopening
2 Tianna Bartoletta: ‘After you’ve gotten your medal, you become black in America again’
3 Sideline Cut: Marcus Rashford proves himself a leading man off the pitch also
4 Ian O’Riordan: An education in race and running during college days in America
5 Mature Ringrose keeping the ups and downs of rugby life in perspective
Real news has value SUBSCRIBE