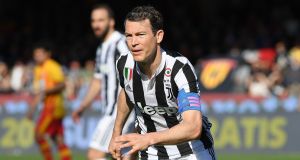 Arsenal head coach Unai Emery believes new signing Stephan Lichtsteiner will improve the club both on and off the pitch.

The Switzerland captain became the first new recruit since Emery took charge following the departure of Arsene Wenger last month as it was announced on Tuesday he was joining on a free transfer from Juventus.

Lichtsteiner, 34, won the Serie A title in each of his seven years with the Italian giants and signs for the Gunners ahead of leading his country into the World Cup in Russia later this month.

While the signing may not raise the excitement levels among the Arsenal fan-base, Emery feels Lichtsteiner could offer something invaluable to the club moving forwards.

“He’s a player with great quality with a very positive and determined attitude. Stephan will improve us on and off the pitch.”

Lichtsteiner, who will wear the number 12 shirt and compete with the likes of Hector Bellerin for a place in Emery’s side, is targeting a return to the Champions League with Arsenal — who have failed to qualify for the competition in the last two years.

“It is a great moment for me, after Juventus, to come to Arsenal,” he said.

“It was a big era under Wenger, he won a lot of titles with Arsenal and did big things, now it is a new moment.

“Wenger went and everything is a bit new so it is a big challenge. He (Emery) is a very good coach and won a lot of titles.

“He is a coach who knows what he wants and who also progresses the players, also the old players like me. I’m really positive we will do great things.”

Borussia Dortmund defender Sokratis Papastathopoulos is also reportedly close to agreeing a move to the Emirates Stadium, with Marouane Fellaini also linked with the club.

The Manchester United midfielder is out of contract at Old Trafford at the end of the month and Press Association Sport understands his representatives have held talks with one of United’s Premier League rivals.

It is believed the Belgium international is currently favouring an exit from United having started just two league games in 2018.