West Ham, Leicester and Everton among the clubs to have expressed an interest in him 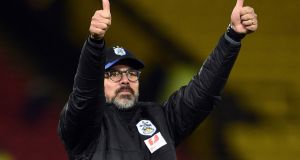 David Wagner has signed a new three-year contract with Huddersfield Town, giving the Premier League club a huge boost and ending any possibility of him being lured away this summer.

The German, who defied the odds to lead Huddersfield to survival last season, has agreed a deal that ties him to the club until 2021 and is worth more than £2.5m a year, making him one of the best-paid Premier League managers outside of the top six.

That reflects Wagner’s value to the club after a remarkable two and a half years during which he has transformed them. Appointed in November 2015, the German won promotion to the Premier League in his first full season and kept Huddersfield in the top flight with a game to spare, after back-to-back draws at Manchester City and Chelsea.

His achievements have made him a hero in the town and raised his profile further afield, with West Ham, Leicester and Everton among the Premier League clubs to have expressed interest in the 46-year-old, who had 12 months remaining on his existing deal.

“I’m very happy that we can announce David, Christoph and Andrew’s new contracts today on the back of a superb debut Premier League season,” Dean Hoyle, the Huddersfield chairman, said. “I understand why David is so talked about and sought-after given the things he has achieved here; he’s a very talented head coach and has played a huge role in transforming Huddersfield Town into the club it is today.

“However, I have never had any doubts about David’s future. Time and time again, he has shown his commitment to Huddersfield Town, as the club has demonstrated its commitment to him.”

Wagner said: “The decision to extend my stay at this club was not a difficult one. The relationship Christoph, Andy and I have with Dean, the rest of the board, the staff and the supporters is special. We’ve achieved some incredible things together in two and a half years and now I’m excited about the future.

“We still have a lot of work to do as we adapt to life in the Premier League, but this club and its people have the ambition, desire and attitude to take this challenge on.”